A glacial erratic of variolitic dolerite, found on the former island of Urk, the Netherlands, has an unusual and characteristic macroscopic appearance, with up to 2 cm long ovoids of reddish material (varioles), embedded in a fine-grained blueish-black matrix (fig. 2). Rocks with an identical macroscopic character (fig. 3) have been found in situ in W.Bergslagen, Central Sweden, where the subvertical, Proterozoic Hjulsjö dolerite strikes NNW - SSE for at least 40 km through a 1.8 - 1.9 Ga supracrustal series. The dyke is characterized by a 1 m wide variolitic margin along its whole eastern length. Microscopically the variolitic dyke sampled at Hjulsjö, and the erratic from Urk are identical (fig. 4). The varioles are composed chiefly of alkali-feldspar with inclusions of amphiboles which are often arranged in zones around a core of quartz and chlorite. The matrix is fine-grained with microphenocrysts of plagioclase, hornblende, and minor augite, together with intergranular biotite and quartz. Instrumental neutron activation analyses were made of separated varioles and surrounding matrix from both the erratic from Urk and the dyke from Hjulsjö. Matrix values for Co, Sb and Th differ by less than 1%, Fe, Sc, Cr, Zn, Rb, REE, and Hf by less than 10% (table 1). The elements Na, K, Sr, Zr, and Ta measured in the erratic differ by more than 10% but still fall with in the spread of values given by a series of analyses of the dolerite dyke (BAKER, unpubl. data). The varioles values are less consistent. However, while only Sr, Zr, La, Ce, Lu and Th differ by less than 15%, the REEs in the erratic variole fall in the range of values for the Hjulsjö dolerite. The remarkably good correlation between matrix values of the dolerite dyke and the glacial erratic, and the less good correlation between variole values, provides convincing evidence that the Hjulsjö dolerite dyke was in fact the parent rock of the Urk glacial erratic. Since this study started, four new variolitic erratics have been found in the Netherlands and W. Germany. 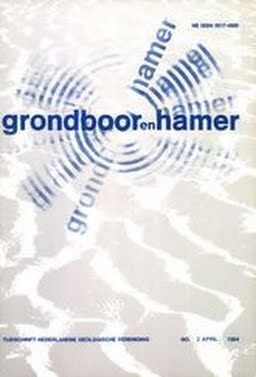