The isomorphy of natural and anthropogeneous landscapes with regard to the environmental conditions in border areas The contact in space between opposite situations constitutes two main types of boundaries. The distinction of these two types offers a useful expedient in ecology. It may also clarify the question why the effects of old-fashioned and modern agricultural systems on the biological richness of man-made landscapes in Western Europe are quite opposite, viz. by increasing respectively reducing the spatial variety. In the neighbourhood of a straight boundary line (fig. 1, A 2) total difference is existing between the white border on the left (w) and the black one on the right (z). This entire difference between the two frontier areas (external) is connected with complete equality within them (internal). It means that in the direction of d (fig. 1, A 3) we shall find a relation of isolation, unequality or closure, while in the direction of o we may expect a relation of communication, equality or openness. The combination of wide external difference and high internal equality marks the phenomena of concentration, damming up and convergence, as for example can be observed along shores (migration birds, seaside visitors, tidal drift) and in the behaviour of water on plastic raincoats. In the case of undulating boundary lines (fig. 1, B 2) the difference between the two border areas has diminished. Both are black and white together, so that in the direction d + (o) (fig. 1, B 3) openness or equality has been gained at the cost of some closure. On the other hand much closure or difference has been gained within the two borders, so in the direction o + (d). The combination of less external and more internal variety marks the phenomena of dispersion, expansion and divergence. This dispersion is maximal in a gradual transition zone between two or more contrasting situations, as demonstrated in fig. 2, A. Vegetation patterns in the latter type of boundaries, here called “limes divergens”, are characterised by a fine granulation and faint lines of demarcation, which can hardly be discerned. The vegetation in such gradient areas is comparatively rich in species, most of them represented by only a few individuals. Moreover a limes divergens is marked by stable internal conditions and stabilizing qualities, as for example can be observed in the behaviour of water on woollen raincoats. In boundaries of this type (“more-or-less”) a high amount of variety-in-space is coupled with a low amount of variety-in-time. The vegetation profile of fig. 3, B represents an example of a natural gradient area (ecocline) between grassland and woodland on limestone. In the first-named type of boundaries, here called “limes convergens”, vegetation patterns show a coarse granulation and sharp lines of demarcation, which can easily be discerned. In this case the vegetation is poor in species, most of them represented by many individuals. Boundaries of this type are met with in frontier areas where two or more contrasting situations alternate in time (fig. 2, B, C, D and fig. 4, 1 C). Thus a limes convergens is marked by unstable internal conditions (“now-and-then” or “to-and-fro”). Here a low amount of variety-in-space is coupled with a high amount of variety-in-time. It is suggested to confine the concept of “ecotone” to the limes convergens. Either category has its own characteristic organisms. Orchids are mentioned here as typical gradient plants, while species such as Potentilla anserina and Agrostis stolonifera are representative of the limes convergens. The vegetation profile of a natural instable environment, as for example can be distinguished on salt marshes (fig. 3, A), is isomorphic to that of the modern anthropogeneous landscape. The fixation of the relations in the latter one is only an artificial stability. The uncertainty of “nowand-then” is always threatening here. This subtype of the limes convergens forms the habitat of those mobile organisms which need the combination of at least two widely differing types of environment situated contiguously without a gradual transition zone between them (fig. 4, 2 (a + b), (b + c)). These “shuttling” animals, such as gulls and many amphibians, live temporarily in large concentrations or colonies, another aspect of convergence. A special subtype of the limes divergens is found in places where instability shows gradual differences in space. The borders along old-fashioned footpaths and tracks across a moorland are wellknown examples of man-made frontier areas of this subtype with characteristic plants such as Orchis maculata, Carex flacca, and Linum catharticum. There also exist typical annuals, such as Cicendia filiformis and Juncus mutabilis, that shuttle from year to year within the gradual transition area (fig. 5, 2 c). The modern technical civilization favours more and more the limes convergens by making sharp lines of demarcation, monotonous vegetations, barrages, ballasted roads, straight canals, by soil hardening and by scale enlarging in re-allotments. On the contrary the former agricultural and mining (peat digging etc.) systems automatically lead to amplification of the spatial diversity in life circumstances. This regulation amplifying between nobsphere and biosphere was mainly the result of three factors: 1. The methods did not change for centuries. By this stability (no variety-in-time) the variety-inspace steadily increased. 2. Isolation by distance gave a gradual restriction to human influence. This restraint was minimal near the dwelling-places in the centre of the action-radius and maximal at the outside, with all possible degrees of influence between the extremes (fig. 6). 3. Our ancestors were operating gradually and on a small scale. By this dispersion in time, which has the same effects as dispersion in space, the spatial variety increased still more. Besides these three main factors numerous smaller elements of divergence occurred in the landscape, such as the unevenness of the soil surface, the windings of ways and watercourses and the tracks already mentioned before. 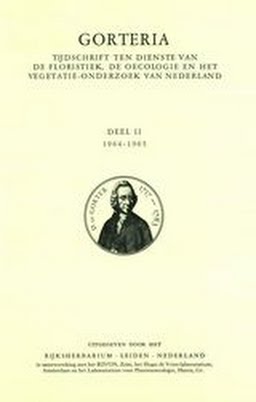