Pteridological Notes, 3 The genus Polypodium in the Netherlands Both Polypodium vulgare L. (sensu stricto) and P. interjectum Shivas occur in the Netherlands. Most of the differential characters reported in the literature overlap one another rather broadly, so that it is often necessary to use a ’syndrome’ of characters for the naming of individual specimens. The results obtained by the present authors do not correspond with those of SHIVAS (22), ROTHMALER & SCHNEIDER (18), or LENSKI (11) in every respect. The two forms appear to differ in the following features: P. vulgare: Frond lanceolate in outline with the lower pairs of pinnae approximately of equal length along a considerable portion of the frond blade, and the apical part often gradually attenuate. Pinnae with a rounded, obtuse or occasionally acute apex and hardly incised to dentate or serrate margins. Colour of foliage bright or dark green, rarely greyish-green. Sori usually situated closer to the midrib than to the margin or approximately half-way between them. Immature sori orbicular, rarely broadly elliptic, frequently reddish brown. Number of indurated annulus cells 10—15 (—23), mean number 12 per sporangium, about 70 µ broad; number of basal cells 1 (sometimes 2); these cells relatively small. Paraphyses absent. Spores (45—) 55—75(—88) µ long and 27—60 µ broad, upon the average 62 by 40 µ. Scales of the ramentum of the rhizome usually somewhat smaller than those of P. interjectum (but fragile in both species and hence in herbarium specimens not so completely preserved as to provide a reliable diagnostic character). As a rule spores maturing earlier than those of P. interjectum. Chromosome number: n=74 or 2n=148. P. interjectum: Frond narrowly ovate to triangular-ovate in outline, with some of the lower pairs of pinnae distinctly longer than the more distal ones, and frequently rather abruptly narrowed into a long-attenuate apex. Pinnae with acuminate apex and usually serrate margins. Colour of foliage nearly always greyishgreen. Sori usually closer to the margin than to the midrib, occasionally half-way between them, frequently somewhat smaller than those of P. vulgare. Immature sori elliptic, usually ochreous, more or less suffused with orange, in colour. Number of indurated annulus cells 6—11 (mean number 9), about 80 µ broad, number of basal cells 2—4; these cells relatively large. Paraphyses absent or sometimes small, unbranched or only somewhat branched paraphyses present. Spores (60—)65—88(—100) µ long and 35—70 µ broad, upon the average 75 by 50 µ. Scales of ramentum of rhizome upon the whole somewhat longer and broader than those of P. vulgare. Spores usually maturing 2 to 4 weeks later than those of P. vulgare. Chromosome number: n=111 or 2n=222. Supposed differences in the ratio between the lengths of the frond petiole and the frond blade, in the degree of branching of the leaf veins, and in the position of the lowermost pinnae in respect of the plane of the frond blade, do not hold. The sterile hybrid, P. X mantoniae Rothm., was recorded in several localities. In a few cases it was found growing among the parent species in habitats disturbed by human activities. Such habitats seem to be particularly suitable for the settlement of hybrid specimens and thus provide a site for possible introgression. In some instances heterosis was manifest and monstruosities were also encountered. In our opinion morphological malformations are of a relatively more frequent occurrence among hybrids or among forms with reduced fertility due to introgression. P. vulgare is often found in more acid environments but is not calcifugous. It also occurs on calcareous rocks and limestone walls (or walls built with lime mortar). P. interjectum presumably has somewhat higher requirements as far as the degree of trophism is concerned. In the Netherlands it occasionally grows on pollard willows (Salix alba), in a characteristic combination of species including, e.g. Solanum dulcamara, Galeopsis tetrahit, and Poa trivialis, and with a strikingly high proportion of berry-producing shrubs, birds being most probably responsible for the high nitrogen content of this particular habitat which can be deduced from the presence of a considerable number of nitrophilous species. P. vulgare is common throughout a large part of the Netherlands, whereas P. interjectum is chiefly found in the calcareous dunes and in the fluviatile district of the lower regions of the rivers Rhine and Meuse. 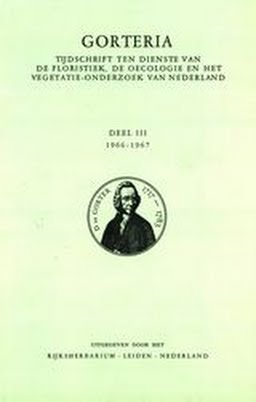