Similarity and difference between Phyteuma nigrum and P. spicatum in the Netherlands have been investigated from morphological, geographical and ecological viewpoints. Data have been collected in lowland areas only (less than 50 m above sea-level). As to the morphology, 96 basal leaves from 10 populations of P. nigrum and 85 basal leaves from 9 populations of P. spicatum were sampled. (The term ‘leaves’ in the next sentences refers to these basal leaves only.) On the average, leaves of P. nigrum have a lower breadth/length quotient than those of P. nigrum, but there is a considerable overlap. Also, the leaf base of P. nigrum tends to be slightly less deeply cordate than that of P. spicatum, and truncate leaves were more frequent in the first-named taxon. But the average ‘cordateness’ ratios only show a small difference and a paramount overlap. Even if both features together are plotted for the investigated populations, 4 P. nigrum and 3 P. spicatum populations appear to be within the overlap range (fig. 2-5). Leaves of P. nigrum are normally crenate, those of P. spicatum are more often serrate than crenate. Incision is most often unequal – neither wholly simple nor distinctly double – in P. nigrum, while in P. spicatum doubly-serrate leaves are most common. However, none of these characteristics allows a sharp delimitation either (table 1). The corolla colour turns out to be the only feature completely distinctive between P. nigrum and P. spicatum. From their geographical distribution it may be concluded that P. nigrum has arrived in the Netherlands later than P. spicatum (but certainly long enough ago to call it a native species). Although reaching here its NW distribution limit, the former is less rare than the latter, which extends further to the N and W. Often P. nigrum is considered a calcifuge mountain plant, but in the NW of its area neither qualification is correct. The few scattered localities of P. spicatum are situated in gaps in the distribution pattern of P. nigrum, with the exception of one station in Drenthe (fig. 6). In the investigated area, both P. nigrum and P. spicatum are most often found in woodland, especially along brooks. Their ecological (dis)similarity has been investigated by means of vegetation analysis. The majority of accompanying species occur together with both P. nigrum and P. spicatum, and none of the differences in presence degree appeared to be significant (table 2). An ordination diagram (fig. 10) revealed one point of difference, however. While P. nigrum is repeatedly met within predominantly grassy vegetation types, only two such stations of P. spicatum exist. It is concluded that of the two taxa, P. nigrum is better adapted to human interference. Where both species occur together, they hybridize readily. In the Netherlands, P. spicatum may have 'eclipsed' after the arrival of P. nigrum, surviving only in some areas where the latter taxon did not penetrate. As to the exceptional locality in Drenthe, where both taxa occur together, it is argued that at the beginning of the 20th century it was a piece of woodland containing only P. spicatum, and that after its conversion into grassland P. nigrum immigrated. In course of time P. spicatum might vanish by introgressive hybridization. Because the corolla colour is the only consistently distinctive feature, it is suggested that the rank of subspecies is more appropriate to P. nigrum and P. spicatum than that of separate species. Therefore, for P. nigrum a new combination is introduced: Phyteuma spicatum L. subsp. nigrum (F.W. Schmidt) Weeda, comb. nov. 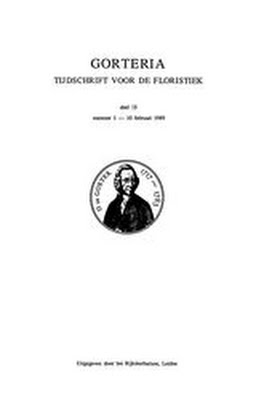