Flower colours and their frequency

After a short survey of the chemical structure of flower pigments the relative frequency of the various flower colours is examined on the basis of an analysis of standard flora’s of different parts of the world: The Netherlands, France, Switzerland, Sweden, Tropical Africa, Cape Colony, Java and Victoria (Australia). The following colours were distinguished: green, white, yellow-orange, red-pink, purple, violet-lilac and blue. In the flora’s thus analysed the percentages of species with these flower-colours do not vary greatly, as is proved by the small standard deviation. The data are; green 7 %% (St.D. 0,8), white 26% % (St.D. 1,4), yellow-orange 31 % (St.D. 1,8), red-pink 15 % (St.D. 1,4), purple 7 % (St.D. 2,8), violet-lilac 7 % (St.D. 2,4), blue 5% % (St.D. 1,1) Red, purple and violet taken together 29 % (St.D. 1,9). The dominance of species with red flowers in the tropics, often supposed to be founded on selective action by birds, bats and butterflies is less pronounced in the table than usually claimed, whilst in the flora of Java it is lacking. A higher percentage of blue-flowering species in temperate regions is not borne out by the analysis either. But there is a marked difference as regards percentages of blueflowering species between the flora of Switzerland as a whole and that of the Swiss Alpine mountain region above 1100 m. The respective percentages are 7 % and 11 %. In the flora of Java which as a whole has a very low percentage of blue flowering species (3 %), this percentage in the mountain region above 1500 m is 6 %. In connection with the experiments of Klebs and others the idea of a direct influence of radiation cannot be ruled out entirely although its significance for the originating of new species is very problematic. Russian authors (N. I. Vavilov) have claimed an influence of more intense radiation in high altitude on mutation processes. The possibility of selection by pollinating agents (2a) deserves consideration, decisive experiments in this matter however, are almost lacking. The main point in the question of flower colour is the fact established by an examination of some 18000 different species from various parts of the world, that in these countries the percentages of white-, yellow-, or red-flowering species are almost everywhere about 5 times as high as that of the blue-flowering species. The mountainflora is the only exception. This fact leads us to the assumption that in the course of ages the evolution of blue pigment in flowers has been an autonomous genetic process only slightly influenced by environment and by the selective action of pollinating agents. This genetical problem of colour evolution in flowers is discussed and the conclusion, corresponding with de Vries’ suggestion, is that whilst yellow flowering as well as white flowering species may be originated by retrogression, the arising of blue-flowering species from red flowering ancestors must have taken place by progressive mutations, in casu of the co-pigment factor. In the fact that these progressive mutations are much rarer than retrogressive ones lies in my opinion the explanation of the low percentage of blue flowering species in all parts of the world.The frequently observed phenomenon of wild blue species giving pink coloured variants is a case of factor mutation in which a dominant factor, probably the co-pigment factor, changes from dominant into recessive. Amersfoort 1951 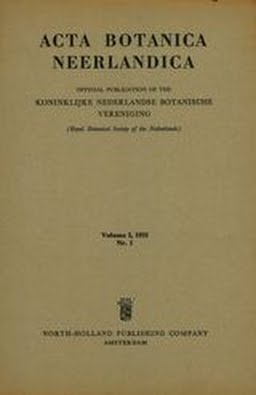