1 °. Our study of the Rubus flora of the N. E. part of the Netherlands (Drenthian district) so far has led to the recognition of 46 Moriferi of which 35 are to be regarded as circle-species and 11 as microspecies. The list on p. 12b includes besides the Moriferi R. saxatilis L. and R. Idaeus L. R. caesius L., the typical dewberry itself, however, has not yet been found. Our 46 Moriferi belong to 4 different subsections; 11 species, viz. 7 circle-species and 4 micro-species to the Suberecti. 20 species, viz. 17 circle-species and 3 micro-species to the Silvatici, 3 species, viz. 1 circle-species and 2 micro-species to the Discolores, 11 species, viz. 9 circle-species and 2 micro-species to the Appendiculati. 2°. The 3 tables give the following data: I. The presence or absence of our 48 species in the stations, that have been studied by us, the number of species in each station (below) and the number of times that each species has been met with (on the right). II. The classification of the Rubus species into 4 groups: 1° species that are typical for forestremains; 2° species that occur in all kinds of wood; 3° species found along road sides and in fields; 4° species so rarely met with, that their habitat is insufficiently known. III. Vegetational records of 28 woods in which brambles were observed. 3°. On pp 15—42 the distribution of our 48 species and subspecies in and outside the area is discussed. 4°. The following species, all typical for the remains of former forests, occur also in the adjoining part of N. W. Germany but have not or only rarely been found elsewhere in our country: R. Arrhenii, R. silvaticus, R. egregius, R. mucronifer, R. badius, R. Bellardii and R. serpens. Common in woods are: R. Nessensis, R. affinis, R. grains, R. Sprengelii, R. pyramidalis and R. flexuosus. Species chiefly found along roads and in fields are: R. fissus, R. plicatus, R. nitidus, R. integribasis, R. ammobius, R. carpinifolius and R. Lindleyanus. 5°. The two first-named groups of species are more or less distinctly associated with the Querceto—Betuletum—molinietosum more humid varieties of the Querceto—Carpinetum. The species from road sides and fields are not restricted to clear-cut communities, but occur also in mosaic communities and in transitional zones. 6°. The Rubus flora of the Drenthian district has been compared with that of the Southern part of the province of Limburg and that of the environs of Nijmegen, as far as this for the moment was possible. 7°. In conclusion the Rubus flora of the Drenthian district has been compared with that of the surrounding countries. It appears to be most closely related to that of N. W. part of Germany, but it contains also several N. Atlantic elements and in this respect it shows an approximation to the belgian, british and Scandinavian bramble floras. 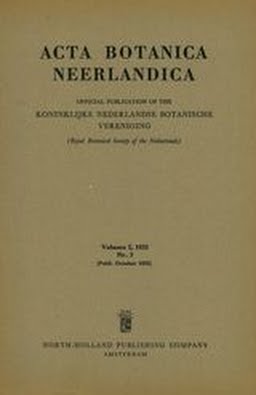