This is the first of a series of papers dealing with the Taraxacum species occurring in the Netherlands. It discusses 16 species belonging to the group “ Vulgaria”, 4 of them have already been mentioned in “Nederlandsch Kruidkundig Archief” [52 ; 231-236. 1942). The species belonging to this group vary widely in their geographic distribution but a large part of those, growing in the Netherlands, occupy an area covering part of the baltic and Scandinavian countries, northern Germany, the Netherlands and Belgium and extending southwards to central France and westwards to southern England. Human influence upon nature is very strong in the Low Countries; it has been favourable for some of these species, for others less so or not at all. A fairly large group live in districts with a sandy soil and prefer slight shade; they are more or less independant of this anthropogenic influence. Others prefer an acid and humid habitat, and play an important role in pastures, until man changes the conditions by modern dunging methods and by other artificial means. For each of the 16 species the synonymy, icones and exsiccata are mentioned; a short description is added, accompanied by a picture of the leaf form; the total area is given as far as known at present, and this is followed by data with regard to the distribution in the Netherlands. 1. T. acutangulum Marklund: rather common, especially on sand and, to a slighter extent, on clay. 2. T. adami Claire (T. gelertii Raunkiaer): compare map 1 for the total area and map 2 for its distribution in the Netherlands. It is common in acid and humid pastures; under human influence also elsewhere, even in slightly shaded places in the sand districts. It avoids brackish soil. 3. T. aequilobum Dahlstedt: rare. 4. T. alatum Lindberg f.; on clay soil it often appears in large quantities; on other soils it is less common. 5. T. ancistrolobum Dahlstedt: common; a var. rubrostriata is described. 6. T. bracteatum Dahlstedt: in acid pastures, rather common; under human influence also elsewhere. In brackish localities it appears together with Armeria maritima, Aster tripolium, and Triglochin maritima; it is often accompanied by other Taraxaca, especially by those belonging to the Palustria group. 7. T. caudatulum Dahlstedt: especially in the dunes along the seashore, also on pleistocene sand, elsewhere rare. 8. T. copidophyllum Dahlstedt: in acid pastures in the northern and eastern parts of the country. It may be that T. copidophyllum, as treated here, will have to be split in 2 or 3 species. Besides the typical form, there is a one of smaller dimensions (though becoming taller in culture), characterized in autumn and early spring by small purple spots on the leaves; it was erroneously identified by me in N.K.A. as T. maculigerum Lindberg f. A third one, also of small dimensions, differing from the type by the outer bracklets of the involucre being strongly adpressed, shows some resemblance to the species of the Palustria group, but it certainly does not belong to the latter. The second form is found around the Zuiderzee in pastures that ten years ago were brackish but that now are no longer so; the third form has been found in peat-bog pastures in Friesland. 9. T. cordatum Palmgren; prefers sandy soil, but has also been found elsewhere. 10. T. croceiflorum Dahlstedt: common. 11. T. cyanolepis Dahlstedt: rare. 12. T. dahlstedtii Lindberg f.: mostly on sand and rather common. 13. T. duplidens Lindberg f.: common in the dunes along the seashore, less common on pleistocene sand in the northern and central parts. 14. T. duplidentifrons Dahlstedt: common in the north-western half of the country and rare in the south-eastern part; mostly on sandy soil; a var. brachyglossa is described. 15. T. lucidum Dahlstedt: common, especially on clayish soil; in brackish localities it has been found with Alopecurus bulbosus, Cochlearia officinalis and Ranunculus sardous. Plants resembling T. fulgidum Haglund are included here; I regard them as a habitat form. 16. T. tenebricans Dahlstedt: in acid and humid pastures, disappearing as a result of agronomic development; it is accompanied in the peat-bog districts by Hierochloa odorata, Viola palustris and Carices, sometimes by Fritillaria meleagris or Sanguisorba officinalis. It occurs together with other interesting Taraxaca: T. austrinum, T. frisicum (ined.), T. hollandicum and T. limnanthes (all belonging to the Palustria), T. nordstedtii (Spectabilia) and also with other T. tenebricans Vulgaria. seems to be restricted in the Netherlands to a small area (map 3). 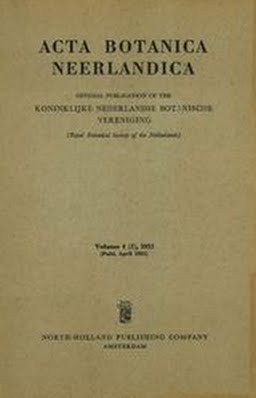