Cells solitary, motile, bean-shaped in dorsal view, not metabolic, (6-) 7 (-10,5) p. long, (3-) 4 (-6) p. wide, dorsal side often convex. Two heterokont flagella inserted ventrally close together near the edge of the single chromatophore, at the edge of a furrow, 1/3-1/2 of the body length from the anterior end. Furrow on the ventral side, partially between keels, running from the flagella insertion obliquely forwards. One flagellum 7-9 p long, 0,20 (x thick, with a blunt conical tip and two rows of hairlike appendages. Each appendage composed of a hollow shaft 0,9 p long, 24 mp thick, attached to the flagellum with a swollen base and ending in a very thin thread 1 p long. The other flagellum 5 (-8) p long, 0,16 p thick, with a narrowed tip 1 p long. Nucleus one, more or less irregularly conical, its apex pointing to the flagella bases. Chromatophore one, luteous, parietal, lobed, enclosing most of the cell, without eyespot; with a girdle lamella enclosing a number of parallel lamellae; with a large pyrenoid without covering of reserve material, traversed by one or two lamellae. Lamellae composed of three thylakoids. A chromatophore envelope of endoplasmic reticulum continuous with the nuclear envelope and containing parallel fibres. A periplastidial reticulum is present between the chromatophore and the chromatophore envelope. A large vacuole containing a granule. Synthemata with lipids and leucosin. Mitochondria numerous, with the inner membrane forming sacculate invaginations. Muciferous bodies numerous, small, adjacent to the plasmalemma. Outside the plasmalemma three parallel electrodense layers; the outer layer composed of tiny bodies. The other two smooth. Type collected 20th May 1967, in a salt marsh alongside a tributary of the Lynher River, east of the village Polbathick, and south of the village St. Germans, Cornwall, England, cultured under no 6756 (Van der Veer), deposited in the Cambridge living collection. 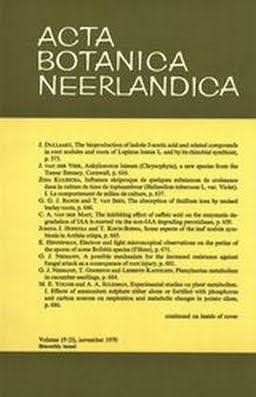