Some considerations on the feasibility of long-distance transport in bryophytes

It is a well-known fact that the flora’s of New Zealand, South-East Australia and southern South America have a close relationship. For Phanerogams this relationship is usually at genus level (species different) and for mosses often at species level. Of New Zealand mosses c. 61% of the species is shared with South-East Australia and c. 27% with southern South America (Van Zanten 1979, 1983). This similarity can be explained either by continental drift (with non-existing, or very slow evolution) or by long-range dispersal. A discussion on this subject is given by Van Zanten & Poes (1982). For an effective intercontinental aerial transport the crucial question is; can the spores survive the hazards of transport, since most scientists agree that long-distance transport of particles smaller than c. 25 pm is feasible. There are two ways to get more information on this matter, 1) to carry out experiments in which the circumstances which the spores would encounter during aerial long-range transport via air-currents are simulated in the laboratory, 2) to carry out experiments in which the spores are mounted in a device on the wing tips of an aeroplane. The first method has been in execution for some years now, but has the disadvantage that U.V. radiation was found to be difficult to simulate satisfactorily. The second method, designed to test the survivability of spores in jet-streams at c. 12 km altitude, has just been started in cooperation with the Royal Dutch Airlines (K.L.M.), the results are not yet available, however. The main results of the experiments (Van Zanten 1978a, 1978b), mainly with material from New Zealand, South-East Australia, The Philippines and Europe, are, as far as they are available, as follows: 1. The spores of a large number of moss species from the temperate zones survived desiccation periods of c. 6 months – 3 years or more, some species even up to 10 years (and probably more). 2. There exists (at least in temperate moss species) a strong positive correlation between the germination rates and the size of the geographical range of the species: spores of species with a limited area are resistant for a shorter period to desiccation than spores of species with a larger area; the greater the area, the longer the resistance. 3. Moss spores subjected to wet-freezing (c. -30°C) after certain periods of desiccation often have slightly higher death rates than untreated spores, and dryfrozen spores often slightly higher than wet-frozen spores. 4. Most spores of tropical rain-forest moss species can survive only desiccation periods of c. 0.5 year or less; wet-freezing has only a slight negative effect on the germination, whereas dry-freezing has, in some species, a higher negative effect. 5. There is a positive correlation between the germination capacity of moss spores and the dryness of the habitat of the species: spores of species from dry habitats are resistant for longer periods to desiccation than spores of species from more mesic or wet habitats. 6. The spores of the Anthocerotales, Marchantiales, and the genus Fossombronia of the Metzgeriales are probably in general resistant to desiccation periods of 2 years and more; they are also resistant to wet- and dry-freezing (only c. 10 species are tested of each group). Of most species the spores are, however, probably too large for aerial transport over long distances. 7. The spores of the Jungermanniales and Metzgeriales (except Fossombronia) are probably in general resistant only to desiccation periods of less than c. 3 months, often much less (c. 30 species tested) and in tropical rain-forest species (at least in some) not resistant at all. The resistance to wet-freezing (-30°C) is good, but dry-freezing has in many species a (nearly) lethal effect. 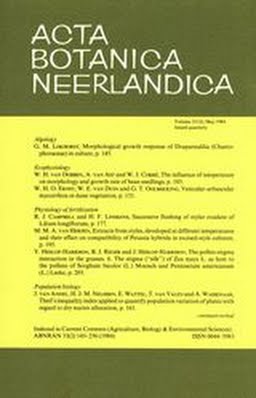