In 1994, 33 breeding pairs were located in The Netherlands, mainly (25 pairs) in NE-Groningen (Fig, 1). Other localities were Lauwersmeer, Zuidelijk Flevoland, De Hoef and Krammer Volkerak. The population declined slightly to 29 pairs in 1995, but the distribution did not change (Fig. 2). As compared to 1990-93, both 1994 and 1995 were poor vole years (common vole Microtus arvalis), although vole numbers started to increase in late summer in 1995. During a low in the vole cycle, Montague’s Harriers have to switch their diet to birds, but otherwise common voles are most important (nearly 80% of food items in 1992-93)(Fig. 3). The present population of Montague’s Harriers has its stronghold in the province of Groningen. After the species almost disappeared from The Netherlands in the late 1980s, an increasing number of pairs settled in Groningen, following the creation of large areas of fallow land in formerly intensively farmed arable land (a measure of the European Economie Community to reduce overproduction of cereals). These fallows caused the outbreak of voles, which in their turn attracted large numbers of raptors, among which Montague’s Harriers (Fig. 4). Breeding success was rather high during the first few years (coinciding with high vole numbers), but dropped drastically in 1994 and 1995. In Groningen, of 25 pairs in 1994, only 5 raised fledglings (4x 1 and 1x 2 young) and of 20 pairs in 1995, only 4 were successful (1x 2, 2x 3 and 1x 4 fledglings). Main causes of failure were adverse weather, causing desertion in egg or nestling stage and reduced hunting opportunities for the male, in combination with food shortage. In 1995, a single nest was depredated by fox, the young in another nest were deliberately killed and one nest in the early nestling stage was exposed to direct sunlight for too long because the female was scared away during harvesting. Pairs at the few other sites in The Netherlands had mixed fortunes. The small Lauwersmeer population (in 1993-95 resp. 6, 5 and 6 pairs) was quite successful in 1995 (5 out of 6 pairs raising 1x 1, 1x 2, 2x 3 and 1x 4 young), but in 1994, only one pair was successful (2 young) because of food shortage. Whereas the majority of pairs nowadays breeds in crops (mainly wheat and alfalfa) active protection of nest sites is necessary to ensure safe fledging. Farmers in Groningen were very cooperative when asked to save nests during harvesting. Besides a safe nest site, the harriers depend to a large extern on voles for food. Although quite versatile in exploiting other food sources, especially birds, it is clear that high vole numbers are imperative for successful breeding (particularly during adverse weather). In this respect, long-term fallow is especially helpful, because voles are extremely scarce in intensively cultivated farmland and vole outbreaks are much less pronounced in single-year fallow. Therefore, the future of Montague’s Harriers in The Netherlands is insecure, as it depends on the agricultural policy of the EEC. 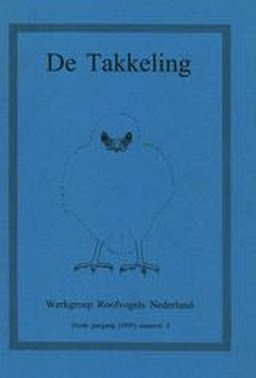