During 1999, the entire Dutch population of Montagu’s Harriers was censused. Nests were located, visited and protected, and food remains were collected. Altogether, 34 pairs were recorded, of which 21 in northeastern Groningen (the only remaining stronghold), 3 in the rest of the province of Groningen, 4 in the Lauwersmeer (northern Netherlands), 5 in Oostelijk and Zuidelijk Flevoland and 1 in the eastern part of Drenthe (Fig. 1). Mean clutch size was 3.7 (n=14, SD=0.8), mean brood size 3.0 (n=11, SD=1.0) and mean onset of laying 20 May (n=6, SD=4.3). Eleven nests contained 18 male and 18 females young at ringing age. Nesting was mostly confined to farmland, where the following crops were used: alfalfa (11), winter wheat (5), winter barley (1), oilseed rape (1) and hayfields (1). A single nest was found in rough herbage. Given the frequency with which alfalfa is harvested, it proved to be quite difficult to successfully protect all nests, despite the close cooperation with farmers and harvesters. Nevertheless, at least 39 nestlings from 14 nests successfully fledged, a better than average achievement, probably because common voles peaked in 1999 (Fig. 4). In and near nests, 598 prey remains were collected (Appendix 1, Fig. 3), with Microtus arvalis, Alauda arvensis, Motacilla flava and Anthus pratensis being most often recorded as prey. In terms of biomass, Lepus europaeus is almost as important a prey species as common voles (Fig. 5), In 1999, a German ringed bird nested successfully near Nieuwolda in northeastern Groningen; a similar event occurred in 1998 near Zuidbroek, when a 3rd calender-year German male successfully raised a single young. On the other hand, a male ringed as nestling in Groningen in 1992 was recorded in mid-breeding season along the coast of Schleswig-Holstein in 1999. Carefully watching legs of Dutch breeding birds in 1999 only revealed a single ringed individual, despite the fact that almost all nestlings are ringed each year, from 1999 onwards including a yellow colour-ring with two inscriptions. These data combined suggest an exchange between Danish, German and Dutch breeding birds (see Fig. 6 for locations of breeding sites in NW-Europe). 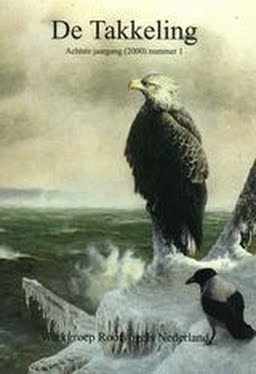