Breeding of Ospreys has never been documented in The Netherlands; it is a regular passage migrant in mainly April-May and August-September. In the wake of expanding populations in Europe, however, the time schedule of Ospreys in The Netherlands started to change. In the 1990s, the birds showed a tendency to advance their arrival dates at favourite staging sites in autumn, and to stay there for longer periods. Interestingly, the number of summering Ospreys also started to increase (Bijlsma et al. 2001). The Oostvaardersplassen, a large marsh (5600 ha) in Flevoland in the central Netherlands, has always held an attraction to Ospreys. The shallow waters with high fish populations (especially Carp Cyprinus carpio) provide excellent hunting opportunities, partly dead and dying willow thickets are used as resting and plucking posts and the public is not allowed to enter the major part of the area. Staging Ospreys in spring have been known for a long time, always using the same sites for resting. This pattern was also observed during breeding bird surveys in April-July 2002, but with some interesting novelties though. The first birds were observed in late April (but may have arrived earlier), making use of the traditional sites. From May onwards, it became evident that pair formation had taken place, the adult male closely following the adult female wherever she went. Both birds were ringed, the male with a locked metal ring on the left leg, the female with a yellowish colour ring (no code discernable with a Leitz 10x40 from a distance of 75 m) on the right leg; her left leg was not seen well enough to notice a ring. During June and early July both birds were visiting several potential nesting sites in the marsh. The female was particularly adept in breaking dead branches from standing willows with her talons. When successful, she laboriously dragged the dangling branches through the canopy of dead willows Salix sp., apparently testing the suitability of crowns and forks for the groundwork of a nest. The branches had estimated lengths of 0.5-1.2 m, none of which was taken from the ground. All these activities were closely watched by the male. When approached, the birds became quite vocal and encircled the observer closely. The approach of another female also elicited strong vocalisations, and an aggressive chase by the resident female. A copulation without cloacal contact was witnessed on 3 July. On 16 July, both adults were attending the groundwork of a nest in the top of a dead willow, building presumably having started only recently. Underneath the nest, the ground was littered with sticks that had dropped from the fork. By 23 July, the nest was still a rather flimsy structure. On 25 July, the partly drooping nest had reached a size of 40-50 cm in diameter. Fallen sticks underneath the nesting tree had sizes of up to 30 cm (n=l 13), 31-50 cm (n=50) and 70-100 cm (n=27). Building was continued intermittently for another month, the nest finally reaching a size of 120x130 cm and a depth of c. 70 cm (30 August). It was built in the very top of a dead willow at a height of 10.5 m, from which a commanding view of the surroundings was possible. Surprisingly, the willow thicket in which the nest was situated was growing on dry ground, some 2 km away from the nearest open water. Presumably, trees suitable for Osprey nesting are scarce in the Oostvaardersplassen, especially because older trees (willows only) are mostly dying or dead. Saplings are mostly grazed by the large numbers of heck cattle, konik horses and red deer before having a chance to mature. Moreover, full-grown willow copses in the marsh are already occupied by nesting Northern Goshawks Accipiter gentilis, a raptor noted for its aggressiveness towards other raptors near the nest (although aggressive interactions between both species were not recorded; 6 Goshawk pairs on 3600 ha of wetland were recorded in 2000). On the other hand. Goshawks declined in the dry part of the Oostvaardersplassen, with only two pairs left on 2000 ha by 2002 (3.1 and 5.2 km away from the Osprey nest). The pair departed from the Oostvaardersplassen in the week of 15-21 September. 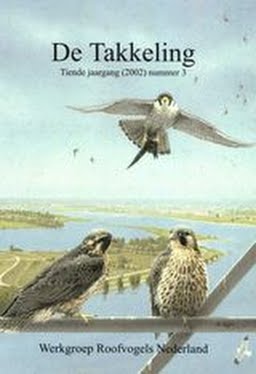