During prolonged tree topping sessions, when systematic observations of raptors, pigeons and social wasps are made from high vantage points in woodland, I watched the hunting behaviour of Goshawks in relation to passing Racing Pigeons, Pigeon racing starts in April, first for short distances only but gradually increasing in length and duration in the course of the season. Racing is typically performed in weekends, when also interactions between Goshawks and Racing Pigeons are most easily observed, as on 20 July 2002 in the forest of Boschoord (surrounded by heaths and farmland, western Drenthe, near Doldersum, 52°54’N, 6°15’0). Observations were made from two Abies grandis some 1300 m apart, with a grand view of the forest and its surroundings, covering the time intervals of 9.00-12.30 h and 13.00-15.30 h. The first Racing Pigeons passed at 10.34 h, the majority between 11.00 and 12.30 h; some stragglers were still passing by at 15.00 h (Fig. 1). The major passage was fast and directed towards WSW-W; by 11.30 h flocks started to fly in various directions, apparently in a more hesitant flight. Flock size ranged from 1 to 25, and averaged 3.39 (SD=4.64) with a median of 2 (51 flocks, 173 individuals). Flying height decreased in the course of the day (Fig. 2). The first Goshawk was observed circling the forest seven minutes before the first Racing Pigeons were recorded. The first three flocks of 1, 1 and 7 pigeons respectively were attacked, the latter successfully by an adult male and an adult female communally (female missed, male took pigeon). The next 31 groups were not attacked. A short revival of hunting took place between 12.28 and 13.19 h, when three attacks by an adult male using speed diving at solitary pigeons failed. Another hunting bout occurred between 14.36 and 14.55 h: three stoops by another adult male aimed at flocks of 1, 1 and 3 pigeons resulted in the capture of a solitary pigeon (presumably the one found plucked later that day near the nest with fledglings, a juvenile according to its ring). All hunting flights followed the same pattern: the Goshawks climbed upwind and used waiting-on to overlook the environment. Racing Pigeons were attacked from high above, in a steep dive, when having passed underneath the Goshawk. Stoops sometimes changed into a shallow flight when reaching the forest canopy, using the momentum of the stoop to keep up speed. Sustained pursuits by active flight were not recorded: once missed, the hawk quickly returned to its former altitude to wait for another pigeon flock. Except a solitary pigeon at mid-high altitude, all attacks were aimed at low-flying flocks of 1 (5x), 2 (1x), 3 (1x) and 7 (1x) individuals. Flock size nor flying height of pigeons being attacked differed significantly from their overall frequency of occurrence within the 51 pigeon flocks passing that day. Hunting success was high: 2 out of 9 attacks met with success (22%). However, out of 173 pigeons in 51 flocks passing on 20 July 2002, only 2 pigeons were eventually taken (1.1%). In a bigger sample, recorded in 1991-2004 in western Drenthe using the same observation method of tree topping, 4766 pigeons in 580 flocks were counted, of which 217 individuals in 41 flocks faced an attack by stooping Goshawks; these hunting flights resulted in the capture of 9 pigeons (0.2% of all pigeons passing by, with a hunting success of 22%). The high success rate of stooping as a hunting mode by Goshawks is probably facilitated by its speed. Moreover, pigeons passing the northern Netherlands have already flown a long distance that day (being released in the southern Netherlands, Belgium, France or Spain). Interestingly also, whereas the first batch of pigeon flocks always passed in a fast directed flight, flocks passing later on were heading in various directions in a slower flight (indicating straying/lost birds, searching for the loft). Finally, among pigeon rings recovered from Goshawk nests, juveniles predominate in summer diets: 59% in the northern Netherlands in 1982-92 (N=241; Bijlsma 1993), 54% in Twente in 1986-93 (N=570; Rosendaal 1995), 56% in Noord-Holland in 1995-2001 (N=436; Vlugt 2002) and 59% in The Netherlands in 1998-2004 (N=604; Bijlsma 1998-2005). These data suggest selective predation by Goshawks. 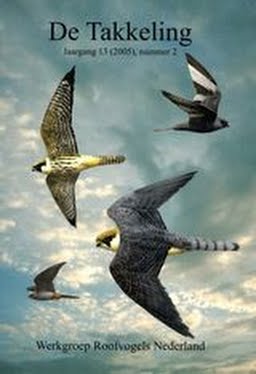