Noord- and Zuid-Beveland, situated in the delta of the southwestern Netherlands, cover 460 km2, of which only 3% consists of woodland and 7% of nature reserves (mostly wetlands). The area has a small human population, mainly concentrated in the town of Goes and small villages. Over the centuries this region has been taken from the North Sea by consecutive endikements, still visible in the landscape by dikes (often planted with rows of poplar) and small polders. Creeks, inlets and (former) sea arms border the region, providing large wetlands with reedbeds. Historically, this region has always been poor in breeding raptor species until the late 20th century when several species started to profit from woodlots planted after the Second World War (in combination with an overall increase of raptors in The Netherlands). Eurasian Marsh Harriers Circus aeruginosus were present with respectively 91, 100, 106, 95, 91 and 88 pairs in 2000-05. The slight decline in numbers is paralleled by a reduction in breeding output, possibly resulting from increased competition for food (and interspecific interactions?) with Common Buzzard Buteo buteo and Red Fox Vulpes vulpes. The Northern Goshawk Accipiter gentilis colonised the area in 2001 and bred for the first time in 2002. In 2005 3 out of 4 pairs produced at least 8 fledglings. The limited availability of suitable breeding habitat offers little scope for a large increase. The local Eurasian Sparrowhawk Accipiter nisus population is stable with resp. 37, 35, 32, 38, 37 and 35 pairs in 2000-05. Breeding success is poor, however. In 2004 for example, 50% of 26 nests failed and the average number of fledglings is less than 3.0 per successful pair. Common Buzzards, a rather ‘new’ breeding bird for the region, increased from 43 pairs in 2000 to 63 pairs in 2005 (Table 1). This raptor species is highly adaptable and has been found nesting on electricity pylons, in poplar rows alongside roads, solitary willows, gardens, orchards, very small woodlots and islands. Buzzards overtake breeding territories of Eurasian Hobbies, and compete for the same food with Marsh Harriers. The present average density of 14 pairs/100 km² is likely to increase in the years to come. Eurasian Kestrels Falco tinnunculus profit from the large-scale provisioning of nest boxes (up to 300 boxes provided; 93% of the pairs uses nest boxes for breeding). Breeding numbers in 2000-05 varied between 108 and 143 (Table 1), in conjunction with fluctuations in numbers of Common Voles Microtus arvalis. In years with a poor vole supply. Kestrels also prey extensively upon juvenile Starlings Sturnus vulgaris and other bird species. The Eurasian Hobby Falco subbuteo shows a steady decline in 1998-2005, with resp. 12, 12, 14, 12, 8,7, 9 and 8 pairs. Hobbies prefer poplars along dikes for breeding. The increase of Common Buzzard frequently resulted in the ousting of Hobbies from long-known breeding sites. Out of 34 nests with known outcome, an average of 2.2 chicks fledged. Important prey species, as based on pluckings found near nests, are Swift Apus apus, Barn Swallow Hirundo rustica, House Martin Delichon urbica and sparrows Passer sp. (Table 2). The Peregrine Falcon Falco peregrinus settled in 2001 and bred successfully for the first time in 2002 (and ever since) on the nuclear power plant of Borssele. 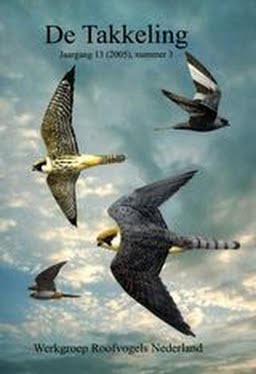