From 2001 onwards, a pair of European Honey-buzzards occupied the same nest in a beech Fagus sylvatica in the central Netherlands, starting egg laying on respectively 24 May, 24 May, 3 June, 28 May and 27 May, and raising successively 1, 2, 2, 2 and 2 chicks (Table 4). This pair was closely observed at the nest in 2004 (34 observation hours) and in 2005 (111.5 h), under conditions of poor wasp numbers (2004, index 2 on a scale of 1-5) and moderate wasp numbers (2005, index 3). The 2004-female returned to the nest in between 17 and 22 May 2005 (in 2004: 17 May), but the male had been replaced by a light phase adult bird in 2005 (2004-male depredated); his arrival was timed at 17 May (Table 5). The male of 2005 was last seen on 22 August, the female on 29 August. Respectively 44% and 45% of the prey items brought to the nest consisted of wasp combs in 2004 and 2005; frogs, nestling birds (mostly Woodpigeon Columba palumbus squabs) and the occasional Slow Worm Anguis fragilis were responsible for another 37.5% and 31.8% respectively (Table 5). The majority of unidentified prey items was too small to specify, and probably largely comprised of invertebrates. Apparently, chicks can be raised even when wasp brood is not easily found. However, in 2005 the chicks, when 28 and 25 days old, were 18% (116 g) and 24% (150 g) short of the body mass they should have attained by then, showing the impact of poor wasp numbers in that particular year (undernutrition). This impact was not (yet) visible in wing length (normal for their age), indicating differential allocation of food resources (into morphology rather than body mass) when food is in short supply or difficult to find (Table 2). The duration of foraging flights depended on prey type: shortest flights were recorded for frogs (on average 24 minutes elapsed between departure from the nest and return with prey), followed by nestling birds (41 minutes) and wasp combs (70 minutes) (Table 3). Overall, out of 66 food transports recorded during the nestling and postfledging periods, the male was responsible for 71% of the prey brought to the nest (Table 1). The female was never seen to bring frogs, hence her longer absences when foraging. Although frogs were evidently easy to come by, the nestlings were never witnessed to touch them (apart from accidentally kicking them off the nest rim). Tearing apart vertebrates was clearly an adult's task. Remains of vertebrate prey on the nest, such as legs and sternum of Woodpigeon squabs, were swallowed by the female. The lack of prey remains of vertebrates underneath the nest was probably caused by raiding ground predators, and by the female's behaviour to swallow remains. Observations in 2005 showed that the female did most of the incubation, with the male incubating 12-25% of the daylight hours in bouts of 1-4 hours. The remaining incubation was strictly female's, including the night hours. Any incubation shift was initiated by the female, waiting for the male to be nearby or pass the nest and then emitting the ticking-call. In the absence of the male, the female stayed on the nest even when producing the ticking-call for extended periods of time. Incubation by the male only seemed to function as an opportunity for the female to be able to forage, preen or bathe, hence warranting non-stop incubation. The smaller share of the male in incubation was also visible in his less well developed brood patch. During the first 10 days after hatching, the chicks were never left alone, and food was exclusively supplied by the male (Table 1). In the 10-day periods to follow, nest attendance progressively declined to <20% in late August. Chick A already wing-practiced on the nest on 2 August (when 29 days old), branched on 10 August, was fully fledged on 18 August, widely roamed on 21 August and was last seen on 26 August. Chick B behaved as a brancher on 18 August, and was apparently still depending on food brought by the female when the latter was last seen (29 August); this chick developed a malformed owlish head in mid-August, possibly following a hornet's Vespa crabro sting. Throughout its post-fledging period, it regularly returned to the nest to scratch for food in the cup (leading to the nest's downfall on 29 August) and waiting for food; it was last seen on 30 August. Both chicks behaved quietly and silently, and did not show any signs of sibling rivalry, both on the nest and after fledging. The nest was profusely “adorned” with sprays of greenery, mostly taken from beech Fagus sylvatica, oak Quercus robur and birch Betula sp. (and some conifers). Adding greeneries started around egg laying, peaked late July (on 27 July, 10 sprays added in 1.5 h), and continued through early August. Remarkably, most twigs were deposited on the nest rim exposed to the observation post on the ground, as if to obstruct a clear view from that direction. 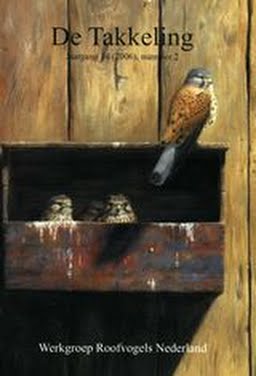