The winter presence of White-tailed Eagles in The Netherlands showed a steady increase in the 1990s and 2000s, consistent with the recovery and spread of populations in Germany and Fennoscandia. In the wetland Oostvaardersplassen, central Netherlands, White-tailed Eagles have been winter visitors since shortly after reclamation of Zuidelijk Flevoland in 1968 (when the Oostvaardersplassen came into existence). Normally, winter numbers varied between 1 and 4 eagles, depending on the abundance of avian biomass. In the early winter of 2004/05, five White-tailed Eagles stayed in the area, including an adult male, a second calender-year female (colourringed, ringed as nestling in Schleswig-Holstein, northern Germany, 12 May 2003), and three first calendar-year birds. The adult male and colour-ringed female stayed the summer of 2005 in the Oostvaardersplassen, mostly in close company. In late 2005, these birds were prospecting potential nest sites by carrying sticks into woodlots. One of these sites, the large Cormorant colony, was abandoned when the Cormorants Phalacrocorax carbo returned to the colony in January and territorial males started mobbing the eagles. The eventual nest site had been visited by eagles with sticks from early December 2005 onwards, but was only located on 25 January 2006. Throughout the breeding season, dead sticks were added until at least the final stage of the nestling period. On 8 September, the nest measured a depth of 2.1 m, and an upper diameter of 1.7 x 1.6 m. The nesting tree was the only tree in the woodlot that was suitable for nest building; most other trees were nothing but stakes in various stages of decay, or lacked a crotch to anchor the nest. A pile of dead branches was found underneath the nesting tree, a near-dead Willow Salix sp. amidst a dead and dying Willow woodlot in the swamps of the Oostvaardersplassen, Presumably, these branches (N=59) represented early failures to establish a foundation in the crotch of the tree at a height of 7.4 m. Fallen sticks varied in length from 47-220 cm (N=59, on average 119 cm, SD=40.6), and in width from 1.1-3.0 cm (mean 1.9 cm, SD=0.49). The nest was exclusively built with dead branches from Salix sp.; branches were collected by flying into dead tree tops and grabbing branches in passing. Based on the behaviour of the pair, the estimated age ofthe chick (plumage characteristics from a distance), a presumed clutch size of one egg, and an incubation period of 40 days, the egg is thought to have been laid on 26 March. Both sexes attended the nest. Out of 6254 observation minutes throughout the breeding cycle, the nest was attended for 70.9% of the time; if not, one or both eagles were sitting nearby. The male’s share in nest attention constituted 35.7% and 31.7% respectively for the incubation period and the nestling stage (overall 33.7%). The egg presumably hatched on 5 June (first day that male and female were seen intently watching the nest cup). The chick fledged on 19 July (75 days old), fully feathered and after days of wing practicing on the nest. It frequently returned to the nest till at least 8 August. The family stayed together through August and September (and possibly later, but not covered for this paper), and remained in the area (ditto). Prey choice is mainly based upon prey remains found on the nest on 8 September, with additional information from prey brought to the nest and one pellet (72.1 x 34.3 mm, containing hair from a cow or horse, i.e. herbivores that graze the nature reserve). Prey remains on the nest were identified as: 6 Anas crecca, 3 A. platyrhynchos, 5 A. clypeata, 3 Anser anser, 4 Fulica atra, 1 Tringa totanus, 1 Sturnus vulgaris, 3 Cyprinus carpio (46-70 cm), 2 Brama abramis (36 cm), 1 Rutilus rutilus (20 cm) and 1 unidentified fish (Esox/Stizostedion). Prey transportations to the nest during the nestling stage included 5 Anser anser, 1 Fulica atra and 1 Anas sp. (Table 1). During spring and summer the Oostvaardersplassen abound with breeding and moulting waterfowl, in 2006 amounting to an avian biomass of 10,000-104,000 kg (lowest in winter, highest in June when some 25,000 Anser anser are moulting; Table 3). This includes high numbers of summering and moulting Anas crecca, A. clypeata (up to 6800 moulting), some 425 pairs of Anser anser (with 6-7 goslings/pair) and hundreds of nesting Fulica atra. Additionally, an outbreak of botulism in July 2006 resulted in the availability of hundreds of dead and dying dabbling ducks, mostly Anas crecca and A. platyrhynchos (Table 2; foraging on these corpses was not recorded, though). The Oostvaardersplassen is also rich in shallow spawning grounds for Cyprinus carpio and Brama abramis, an attractive food source as well. On top of that, the nature reserve of 5600 ha (3600 ha of wetland) is stocked with some 3000 horses, cattle and Red Deer Cervus elaphus (April 2006), resulting in year-round availability of carrion. Possibly, the latter is only important as alternative food in winter, when waterfowl is absent during spells of severe weather. Agonistic encounters, with the eagles being harassed, were recorded with local breeding birds of Circus aeruginosus (frequently), Buteo buteo and Corvus corone. The local breeding pair of Accipiter gentilis disappeared upon settlement of the White-tailed Eagle (some 100 m away from the Goshawk nest site), although actual encounters between the two were not witnessed. The passing of a juvenile Gypaetus barbatus on 15 May triggered the sentinel female (male on nest) into an immediate ascend; she escorted the vulture away from the vicinity of the nest. 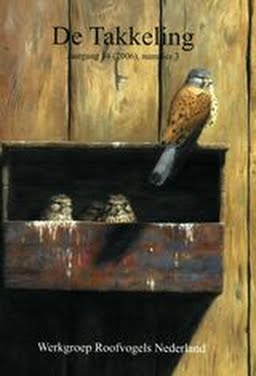