Black Woodpeckers apparently colonised the province of Drenthe (2681 km2) in the late 1920s, when several nesting holes were detected on estates. In the first half of the 20th century, the area of woodland was restricted (10.000 ha in 1920). Most planting (mainly of coniferous trees) occurred between 1920 and 1950, increasing the area of woodland to 21.000 ha in 1950. The number of Black Woodpecker territories was estimated at a minimum of 25 in 1960, mainly breeding in older woodland planted at the turn of the century on former sanddunes and in estates. Commercial woodland was not yet suitable for nesting, but it provided an abundant food supply. From the 1970s onwards, commercial woodlands started to become attractive as breeding sites, given the distribution and number of holes found in Larix leptolepis and Pseudotsuga menziessi in the early 1980s. The breeding population in Drenthe was estimated at 255 pairs in 1975-79 (van Dijk & van Os 1982) and at 350 pairs in 1978-95 (van den Brink et al. 1996). However, both estimates are unreliable, as became evident during intensive nest searches in the 1990s. In a number of large and small woodlands, totalling 13,023 ha, only 34 nests were located, as compared to an estimate of 145 territories based on standardised territory mapping (Table 1). With a mean density of 0.29 pairs/100 ha of woodland, and taking into account its near-absence in woodlands <250 ha, this results in a total of 62 pairs in Drenthe in the 1990s, rather than 350 pairs (as in van den Brink et al. 1996). The latter estimate is clearly flawed. The trend of the Black Woodpecker in Drenthe shows a steady increase from the first few pairs in the late 1920s to a peak of 100 pairs in the mid-1980s (Fig. 1). Since then, a decline was noticed, especially in the 1990s. This decline became first apparent in woodlands smaller than 250 ha, which are presently almost completely deserted by breeding Black Woodpeckers. This suggests that small woodlands are sub-optimal breeding sites. The positive trend up to the mid-1980s was evidently caused by the increase in acreage and maturation of woodland planted in the first half of the 20th century. Its subsequent decline is less easy to explain, given the present age and extent of woodland in Drenthe. Data collected in 1998 showed a relatively small clutch size of 3.1 eggs (N=7) and a small number of fledglings/successful nest (mean of 2.8, N=5); this compares unfavourably with the means of 4.2 eggs (N=8) and 3.2 fledglings (N=5) on the Veluwe (large woodland in the central Netherlands) in 1998. Although the samples are still small, it may indicate a difference in breeding performance between both regions. It is suggested that Black Woodpeckers in Drenthe temporarily may have profited of the creation of large dear-fellings, following two severe storms (November 1972, April 1973). These fellings were replanted, and became unsuitable as foraging sites in the course of the 1980s. If this scenario holds, a stabilisation of breeding numbers at a lower level is to be expected at the turn of the century (A in Fig. 1). If food resources are more structurally declining, a further decrease in Black Woodpecker numbers is to be expected (B in Fig. 1). The impact of predators, such as Goshawk Accipiter gentilis. Common Buzzard Buteo buteo and martens Manes manes and M. foina, is not yet known. These predators increased during the 1980s and 1990s, but very few cases of depredation of Black Woodpeckers were recorded. 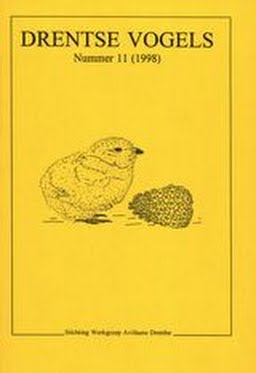