The Drents-Friese Wold covers of 5000 ha of mainly woodland and heaths along the border of the provinces of Friesland and Drenthe (northern Netherlands). Woodland has been planted between 1890 and 1950; dominating tree species are Scots Pine Pinus sylvestris, a Larch hybrid Lor/x leplolepis, douglas fir Pseudotsuga menziesii, , Norway spruce Pice a abies, sitka spruce Picea sitchensis, oak Quercus robur and beech Fagus sylvatica. During the breeding season of 2004, several observers mapped most bird species during five complete visits from March through June, using a standardised, low-intensity variety of the combined mapping method. Of three pairs of Parrot Crossbills located, one was observed twice in a mixed stand of Pinus sylvestris and P. nigra on 13 April. The male was singing subdued and closely followed the female, indicating nestbuilding. On 14 April, a second pair was observed building a nest in the top of a Norway spruce (22 m); only few small patches of Scots pine were present in the vicinity of this site. The female collected grosses from the ground, indicating that she was constructing the nest cup. On 22 April the nest tree was climbed. The female left the nest, which was built about one metre under the tree top. It was built on several small braches and against the main trunk of the spruce; because of hanging twigs, the nest was very well hidden, even when observed from within one metre. The diameterof the nest, constructed of spruce twigs, grasses, moss and a large piece of paper tissue, wasc. 15 cm. The nest contained fourfresh eggs. The eggs measured 24.5x16.4, 24,9x16.3, 24.3x16.3 en 25.4x16.5 mm. On 7 May the nest was destroyed, probably by a predator, and no Parrot Crossbills were observed anymore at this site. On 13 May, a third pair was seen foraging in an open mixed stand of Pinus sylvestris and P. nigra. The parents were closely followed by a begging fledgling that seemed unable to fly long distances. The fledgling had a short tail and not yet fully grown mandibles. The Parrot Crossbills showed a preference for foraging in Pinus sylvestris and nigra. However, in the northern and southern part of the study area, where both Pinus species abound, no Parrot Crossbills were observed. Timing of breeding was apparently mismatched in relation to seed availability, because most pinecones opened and shed their seeds in large quantities in the course of April due to increasing temperatures. It is probably not coincidental that only the earliest pair (calculated onset of laying; 3 April) fledged a chick. 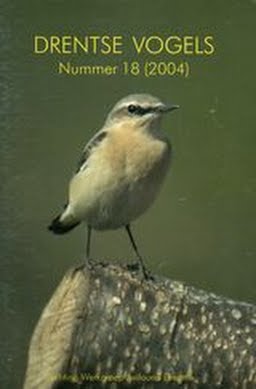