The Mutual Relations between Algae and Fungi in Lichens

1. The fungi which live in symbiosis with the aerial proto-pleurococcoid algae were isolated in pure culture. It appeared that there existed a great similarity between the morphological characters of these fungi and true lichen fungi. Yet the growthvelocity was much better. In consequence they formed an excellent object for the study of the symbiosis. 2. It appeared that these fungi could develop on media containing sugars, polyalcohols or starch, that some of them could use peptones as sources of carbon. Cellulose and pectin were not attacked, nor were salts of organic acids. 3. The fungi could not fix atmospheric nitrogen, there was no preference for organic sources of nitrogen over ammonium salts. 4. They could not develop in pure synthetic culture solutions, the addition of some nutrilites was absolutely indispensable. Partially these nutrilites could be identified with aneurin and ft alanin. 5. The symbiontic algae (Apatococcus and a number of Cystococcus gonidia) can provide these nutrilites (or similar) to the fungi. 6. The fungus of Xanthoria parietina showed the same need of some nutrilites. It appeared that these nutrilites belonged to the bios group. 7. The Cystococcus gonidia of Xanthoria parietina, Physcia pulverulenta and Parmelia acetabulum grew much better on organic substrates than on inorganic media. When the inoculation was not too heavy, after three months not a trace of development could be observed in culture solutions without organic substances. Simple carbohydrates were the best sources of carbon; there was no marked preference for organic sources of nitrogen. There was no reason to suppose any fixing of atmospheric nitrogen. 8. The heterotrophic development of these gonidia was favoured by the addition of extracts from the symbiontic fungi but also by the addition of yeast-extract. These extracts were not absolutely necessary, their only influence consisted of a shortening of the lag-phase in growth. The active factors of these extracts partially belonged to the bios-group, in some cases nicotinic acid had a marked influence. Partially the effect might have been caused by the presence of suitable sources of nitrogen. 9. The autotrophic development only was possible (or was highly stimulated) by the presence of ascorbic acid, dioxymaleic acid and (most probably still) by other dienolic compounds, (glucoreducton). As these substances are easily oxidized by the air the effect was most pronounced, w'hen the cultures were incubated in an atmosphere of hydrogen with 5 % carbon-dioxyde in the light. Then only too y % ascorbic acid gave a development, which was comparable to the development on organic culture solutions. 10. Upon these facts a mutualistic theory of the symbiosis was based, in which apart from the provision with assimilation substances of the fungus by the algae the exchange of nutrilites played an important role. 11. A new method for the synthesis of the symbiosis is described, which makes it possible to change the humidity and the concentration of the food-substances at will. 12. The fungi which live in symbiosis with the proto-pleurococcoid algae could produce no lichenic acids or similar substances, when cultivated under the most varying circumstances. 13. On the other hand it appeared that the alga Apatococcus minor synthesizes a remarkable metabolic product provisionally named apatococcin. 14. A chemical investigation of this substance showed that it possesses the following tentative formula C23H4i04N, that it possesses one carboxylic group esterified with methanol or ethanol, that it most probably possesses a long paraffin chain. The function of the nitrogen could not be elucidated, the neutral character of the substance made probable, that the basic function of this nitrogen was anyhow bound by an acid group of the molecule. A relationship with certain aliphatic lichenic acids is probable. 15. The literature concerning the problem of the production of lichenic acids is reviewed and it was concluded that as certain fungi can produce certain lichenic acids, and certain algae can produce similar substances in pure culture the lichenic acids cannot be regarded as the result of a specific metabolism of the symbiosis. We have only the right to speak about an accumulation of these substances as a result of the symbiosis in some cases. 16. The water-household of the Cystococcus gonidia in pure culture was examined; it appeared that these algae most probably can endure the desiccation on the natural substrates of lichens without the protection of the fungus. After a week drying over concentrated sulphuric acid, they had not lost their vitality. they could develop in a relative humidity of the atmosphere higher than 91 %, while high temperatures only could be endured, when the relative humidity was low. 17. There is only little difference between the imbibition-curves of the lichen-thallus, the lichen-fungus and the lichen-gonidia of the same lichen-species. 18. The protective influence of the fungus against desiccation of the algae only is very small and can only be perceived when the desiccation is not too intense. 19. The lichen-symbiosis is compared with other cases of symbiosis and it is concluded, that the differences are only apparent, while there is a great similarity as in all other symbiosis the exchange of nutrilites plays one of the most important roles. 20. This similarity still can be observed, when we extend the definition of symbiosis towards all dependences of vital units belonging to the same or to different species as has been proposed by Baas-Becking and for which definition some arguments are brought together in this paper. 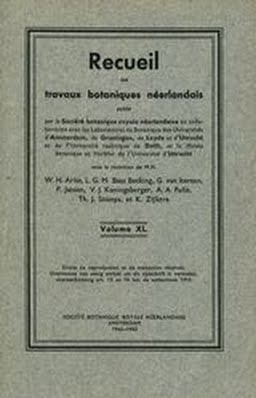