Some Properties of the Chlorophyll in Relation to its biological Function

1. The principles of the usual methods of investigation of photosynthesis have been exposed. It was explained why at the same time an approach of the problem from a structural point of view might be useful. 2. From the latter point of view, compounds as proteins, chlorophyll, carbon dioxide and water might be of first importance, probably followed by lipoids, carotinoids and ashes. 3. Chlorophyll was prepared. The choice of the method of purification of this compound was explained. Chlorophyll a+ b, of a purity of 97 %, both the components, phaeophytin, Zn-, Pb-, Cu- and Hg-chlorophyll, ethyl-chlorophyllide, ethylphaeophorbid and afiomerised chlorophyll were prepared quantitatively. The absorption spectra of the foreign metal compounds are given. The iron-compound could not be obtained, probably in consequence of technical difficulties. The sequence Mg-, Zn-, Hg-, Pb-chlorophyll, phaeophytin, Cu-chlorophyll was discovered in different properties of the compounds. Deductively, the place of iron in the sequence will be found in the neighbour- hood of Pb and Cu. This shows a certain contrast between the assimilatory Mg and the dissimilatory Cu and Fe. 4. These compounds were spread monomolecularly on buffer solutions from pH 2.6 to 12. In addition, the potential differences of the monolayer-bearing interfaces water-air were measured at different pH’s. In this way a very sensitive means of investigation of the interaction of chlorophyll and water was obtained. Chlorophyll attracts + ions at its cyclopentanon group and it repels — ions, the natural Mg compound is most active in this respect, Zn less active and the other metals the least active (Cu might possess an inverse activity). Phaeophytin is absolutely inactive. At high pH the charge of the double layer as well as hydratation increases. 5. A magnitude “ Fmax. ” which might be of use when measuring hydratation in spreading experiments was applied and a possible explanation of its character was given. 6. To achieve a better understanding of the structure of the above monolayers X-ray diagrams were taken of the crystalhzable compound ethyl-chlorophylhde. The dimensions of the chlorophyll molecule are 3.87, 15.48 and 15.62 A. The surface of the molecule in the plane of the carbon skeleton is 242 A2. The molecule is a flat plate. The measurements yielded a similar structure for the crystal and for the monolayer, the molecules of the monolayer enclosing angles of 550 with the water surface. 7. It was explained, from data in the literature on other porphin compounds (hemoglobin, catalase, Warburg ferments, erythrocruorins, cytochromes, etc.), that chlorophyll occurs most likely in plants in tetrads: 4 molecules together on a protein carrier of globin dimensions (M.W. 68000). It was endavoured to prove the volumetrical possibility of this supposition by measuring the number of chlorophyll molecules per granum. The probability was discussed of a carbamino-C02 bond at this protein molecule in photosynthesis. 8. It was tried to plan a structural model for the photosynthetic mechanism, covering the demands of the present knowledge of the process. A model is described consisting of a chlorophyll-protein tetrad, a. suggesting a uniform mechanism for photosynthesis in green plants as well as in bacteria, b. allowing of photosynthesis running entirely within an area of small dimensions, within one molecule, c. able to prevent much of the loss of energy, otherwise needed for the activation of intermediary products. 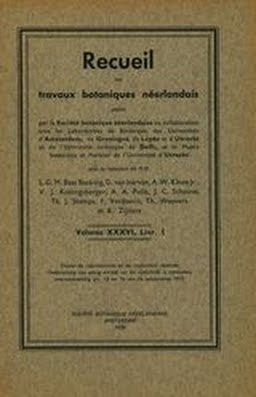