1. The researches were made in a cupboard, which is divided into four partitions. Their fronts are provided with glass filters, which resp. let through red, green, blue and subdued white light, in the same intensity, viz. about 25 % of the energy of diffuse daylight. The ultraviolet and infra-red rays, which pass through the filters, can be neglected. An installation was made to pass a slow current of air through the cupboard, so that temperature and humidity could be regulated. The quantity of light proved insufficient for many species of plants, probably because assimilation of carbonic acid was not intense enough. Results were obtained with plants, where apparently assimilation was stronger than dissimilation, but, with rare exceptions, the surplus of the former was only small. 2. Investigations with Sempervivum tectorum, S. Funkii, Ajuga reptans and Glechoma hederacea make clear that the development in blue is very similar to that in full daylight; red has the same influence as darkness; in green the phenomena resemble those in red, whilst in grey (subdued white light) they remain about midway between red and blue. 3. Generally the same holds true for Vallisneria spiralis and Ceratophyllum demersum, though these species showed a fairly intense assimilation. 4. Populus nigra forms much callus, without shoots, in darkness and in red, little callus with numerous shoots in white and blue; and also in grey and green, the latter being an exception. 5. Potamogeton natans, Alisma Plantago, Sagittaria sagittifolia and S. subulata form two sorts of leaves: in their youth linear, immersed ones and later on aerial leaves with well differentiated blades. In red and green the plants never develop beyond the linear leaves, never surpass their youth-stage. In blue, and to a smaller degree in grey, also the aerial leaves with blades are formed, quite the same as they appear in full daylight. This is not due to assimilation. 6. Exchange-experiments were made with Glechoma hederacea, Alisma Plantago and Sagittaria subulata; when the stage of development, obtainable by the light in the cupboard had been reached, the specimens from red and blue were interchanged and equally those from green and grey. The result is an immediate reaction, in such a way, that they adapt themselves to the new colours. The aerial leaves, which had been formed in blue and grey, disappear in red and green, whilst only immersed ones are newly developed; and vice versa. It is supposed that red light and darkness retard the waterabsorption of the protoplasm, this being furthered by blue and white. If this supposition be true, a great number of phenomena, observed in this research, would be explained. 7. The diastase of Aspergillus niger is destroyed by white light and equally by blue rays. In darkness, red and green, it is constant. In grey there is a slow decrease. When the degree of acidity is lowered, the decrease is slower in all colours. The formation of diastase is not influenced by any of the colours, not even by full daylight. The diastase of Aspergillus Oryzae is not in the least sensible to light at a pH from 6.— to 7.—. At a pH 5.— it becomes unstable, but the decrease in this case is due to acidity rather than to light. It always appeared that the quality of the light rays has a predominant influence on the outer and inner development of the plants. In blue, habitus and anatomy are equal to, or approach the normal state in full daylight. In red, plants are etiolated as in darkness (except of course that chlorophyll is formed). In green, phenomena are either the same as those in red or development is reduced to a minimum; the latter is undoubtedly due to a total absence of assimilation of carbonic acid. In grey, development now resembles that in blue, now that in red, depending on the needed quantity of blue rays being small or great. The cupboard, which was used for this research, was built in the Laboratory of Technical Botany, Delft, thanks to the initiative of the director, professor dr. ir. G. van Iterson. I was allowed to use it throughout my experiments. For this I want to express my heartfelt gratitude to professor Van Iterson, and also for his continual interest in all other respects. In the laboratory as well as in the botanical garden, there have been many, to whom my investigations caused much extra word. I have great pleasure in thanking them for their very valuable help and assistance. Finally my colleague, Mr. C. Deelder, Schiedam, once more had the extreme kindness to help me to correct the translation of this paper. Also to him I owe a great debt of gratitude. 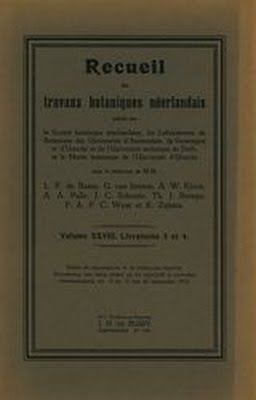