An Ecological Study of the Vegetation in three former River Beds

In three former river beds of the river Waal near Zaltbommel a study was made of the factors which determine the differentiation in the vegetation. The water in each of the three beds is eutrophic. One of the beds is situated inside the main dike of the present river, the two other ones outside the latter, i.e. in the area which is exposed to the yearly returning floods. In only one of the two former river beds outside the dike a current is noticeable during these periods. At that time clay is deposited, and the bottom of these two beds accordingly consists of clay. In the former bed that is protected against these floods by the dike, only in the central part of the bottom the clay is still exposed, whereas nearer to the bank it is covered by a layer of peat. The vegetation in so far as it might be regarded as a natural one, was studied in detail, and appeared to consist in the main of a community belonging to the Potamion (in the deeper part), pioneer facies of the Scirpeto-Phragmitetum (Phragmition), later stages in the development of this association (a.o. “floating mat”-communities), one belonging to the Magnocaricion (in the shallower water), and, in the case of the former bed inside the dike, a carr-wood. The vegetation varied, however, in the different beds and eventually also in different parts of the same bed. The way in which the vegetation in the three former river beds differs, appeared to depend i.a. on the degree in which the various species are able to resist the current, and this mainly depends on their way of rooting. Only species like Phragmites and Scirpus lacustris can maintain themselves in places that are exposed to a strong current, because they are firmly anchored in the soil. Weakly anchored species like the two Typha’s are found only in places where there is no current, and the development of floating mats is possible only in stagnant water. Apart from the presence or absence of a current, important factors are the depth of the water and the consistence of the soil in which the plants are rooting. The correlation between the depth of the water and the nature of the vegetation appears in the succession of the Potamion by way of the pioneer facies of the Scirpeto- Phragmitetum to the later stages in the development of this association. In less deep water the consistence of the soil comes to the fore. In the former beds outside the dike the vegetations belonging to the Scirpeto-Phragmitetum grow on a muddy soil showing little or no cohesion, but the Caricetum gracilis-vesicariae (Magnocaricion) is confined to soils showing a higher degree of rigidity. Of great importance is the faculty to multiply vegetatively by means of rhizomes, which is found everywhere where a definite species determines the character of the vegetation, i.e. where a definite facies is present. This applies to the vegetations found on the floating mats too, which possess a frame work consisting of rhizomes. At first the latter belong exclusively to Typha angustifolia, but in subsequent stages of their development rhizomes of other species too take part in the development of this frame work. In the course of their development these floating mats may reach a considerable thickness. This growth in thickness is accompanied by a change in the type of vegetation. In the bed behind the dike the floating mats are particularly well-developed, but at places where in this bed no floating mats are present, the plant remains sink to the bottom, where they give rise to the formation of a layer of peat. On the latter a vegetation of Carex riparia, representing the Magnocaricion, and a Salix cinerea-stand develops. The plant remains found in the bottom (peat as well as clay) were studied by the aid of the microscope, and in this way it proved possible to reconstruct the succession in the beds, except in those places where during the period of flood a current is present, because in that case the plant remains are swept away. It was proved that a vegetation belonging to the Potamion appeared first and was always succeeded by pioneer facies of the Scirpeto-Phragmitetum, eventually followed by later stages in the development of this association. The Caricetum gracilis-vesicariae, on the other hand, was no stage in this succession, but developed in the shallow water of the marginal zone on a bare soil. The floating mats in their initial stage appeared to develop as an extension of a Typha angustifolia-vegetation „ _ „ rooting in the bottom, overgrowing subsequently the pioneer facies of Equisetum fluviatile and/or a Potamion-vegelation. Other species settled on the floating mat as soon as it attained a certain thickness because of sedimentation of clay and/or plant remains. Below the floating mats in the bed behind the dike a layer of peat was found which proved to consist of remains of Stratiotes aloides, a species which at present is met here but rarely. Peat of the same composition was also present below the open spaces between the floating mats, i.e. on the spots where the vegetation of Carex riparia and that of Salix cinerea is found. 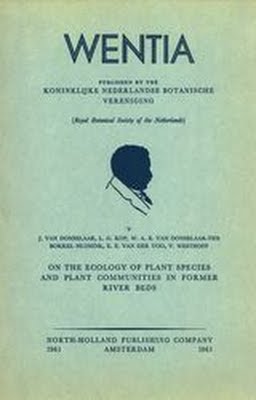