A mass stranding of severely oiled seabirds on the mainland coast of Noord-Holland between 30 April and 4 May 1985 included Fulmars (1.3/km), Gannets (0.9/km), Guillemots (14.2/km), and Razorbills (1.0/km). This paper discusses details of 47 Guillemots, collected on the beach, which were covered with a 2 cm layer of sticky oil. On dissection, notes were made of sex and age (presence or absence of bursa Fabricii, development of gonads), physical condition (fat resources, condition of breast muscle), moult (belly, sides and throat) and stomach contents, because little is known about the Guillemots in the southern North Sea in late spring. The data were compared with similar data collected in winter 1982/83-1984/85 and literature. The origin of the casualties was calculated using the results of drifting experiments (figure 1). The corpses have been drifting for 1-2 days only, and probably from a direction of 309°, 45 to 90 km from the place of beaching (drifting speed is 2-4% of wind velocity). It was calculated that between 700 and 1000 Guillemots have washed ashore as a result of this particular oiling incident. Most Guillemots were immatures and males predominated (table 1). The proportion of immatures was significantly above that in winter (G adj= 19.27, d.f. 1, p<0.001), but the sexratio was similar (G adj= 3.27, d.f. 1, p>0.05). At most 4.3% (n= 46) may have been adult (no bursa, well developed gonads). Pre-nuptial moult was noted in most specimens (77.8%, n= 45), again indicating immaturity since adults have usually completed this moult in winter. The predominance of (young) immatures could be expected, since adults and older immatures should be in the immediate vicinity of the colonies this time of year. It is noted that the predominance of males is very similar to that in winter. Further studies, including comparison of the sexratio in various age-classes, are recommended. The physical condition was very good in most cases, with fat resources and muscles in good shape (table 1). In winter, physical condition was usually very poor. It could be seen that most casualties had occurred immediately after contacting the oil slick. Remains of fish, sometimes even including partly digested fish, were found in 83.0% of the stomachs (n= 47, table 2). In the otoliths taken from the stomach contents, sandeel Ammodytes spp. predominated (93.0%, n = 200), with smaller numbers of Whiting Merlangius merlangus (6.5%). Besides otoliths, 11 pro-otic bullae were found, indicating Clupeidae as prey. Sandeel is regarded as the main prey, occurring in 25 out of 31 stomachs with identified fish remains. Fish-lengths were calculated from otolith-length in sandeels (following Breiby 1985, figure 1) and otolith-width in Whiting (reference collection NIOZ/NSO, figure 2). The average (191.9 ± 26.75mm) and maximum length (223.7mm) of Whiting calculated from otolith-width, are rather large compared with similar findings for Guillemots prey in literature (Cod max 210mm; Blake et al. 1985). Calculated fish-height (36.9 ± 6.42mm, range 22.7-44.5mm) was also well beyond the preferred size as known for Trisopterus esmarkii in experiments with captive birds (Swennen & Duiven 1977), and in 2 instances even exceeded the maximum height of gadoids accepted by captive Guillemots. Notes on the diet of Guillemots at sea are scarce, particularly this time of year. Studies of birds shot near Aberdeen in April and drowned Guillemots off Flamborough Head in April also showed sandeels to be the main prey. Clupeidae and Gadidae were not represented in the Aberdeen April sample but they are commonly taken at other times of the year. The occurrence of substantial numbers of Guillemots in the Dutch sector of the North Sea was later on supported by results of ship-based counts at sea, showing scattered low densities in Mar-Apr. Since the early 1980s tens of thousands of Guillemots washed ashore every winter, but this April stranding was different. The winter birds are usually slightly oil-contaminated and most have probably died from starvation. True ’oil-victims’, such as the birds picked up in April 1985, have been quite rare in recent years. The sample collected in April was unusual in a sense that the birds had died as suddenly by the oil, as if they had been shot. For studies of the diet these casualties proved very useful. 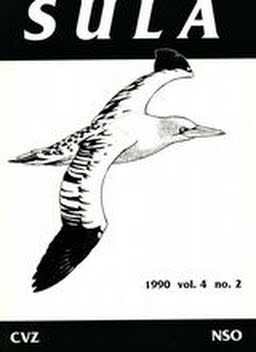