Seawatching was most extensive in Noord-Holland (NH), as usual. Some 100 hours of data were produced in Zuid-Holland (ZH, mainly Bloemendaal and Westkapelle), some 130 hours were received from the Wadden Sea islands (mainly Ameland). Fulmars and Manx Shearwaters were seen in small numbers in June and July. Best days were 6th June (80 Manx Shearwaters) and 20th August (19 Manx). The first half of July was good for Gannets in NH, and hundreds could be seen from Vlieland in the third week of August. Remarkable were two waves of migrating Grey Herons in NH: one in the middle of July, another during the last week of July. Up to 96 herons were counted on a single day. In August, Cormorants were noticed far more regularly at sea than usual, maybe reflecting the increasing number of coastal colonies and the good breeding success. Hundreds of Common Scoters were seen heading west on Ameland in the second half of June and the first half of July. This peak was also recorded in NH, but the numbers were smaller. Hardly any scoters were spotted in ZH. The moult migration of the Shelduck was not particularly spectacular this summer. The majority was seen during the second half of July. Wader migration was not very striking this summer. Westkapelle produced a remarkable 350 south-flying Oystercatchers on 12th August and at Katwijk 60 Whimbrels were seen on 16th August. These were the only ’high-lights’. Arctic Skuas were regularly seen only during the second half of August, other skuas were scarce. Two immature Longtailed Skuas were observed chasing Sandwich Terns on Griend. Mass-movements of Black-headed Gulls were recorded at intervals. One wave in early June, two in July, two in August. At first, in early June and early July, most of the gulls were adults or in their second year. Later on the number of juveniles was considerably larger. Terns were observed in fair numbers all through the summer. Massmovements were recorded in early July (mainly Sandwich Terns) and in August. ’Commic’ terns were found to include a fair amount of Arctic Terns in the end of August. Information from: M.O.Bleyerveld, J.Bijleveld, G.Davidse, J.van Dijk, K.J.Eigenhuis, S.Geelhoed, N.van der Ham, J.Hengst, A.A.Kraus, S.Lagerveld, F. Majoor, T.Mank, P.Nijhuis, A.Ovaa, M.Platteeuw, D.Schut, R.van Splunder, W.van Splunder, L.Stegeman, M.Versluys, C.J.N.Winter, B.Winters, P.A.Wolf, K.Woutersen, J.N.Ynsen. 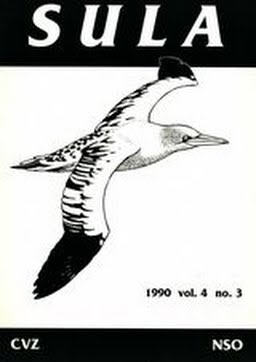