During May and June, there was almost daily coverage in Noord-Holland (NH) at Hondsbossche Zeewering (Hbz) and Egmond aan Zee (Egm). In Zuid-Holland, seawtaching was carried out daily at Scheveningen (Schev), Bloemendaal (Bloem), and Noordwijk (Nw). July data were only received for NH. During May-July, some 100 hours of seawatching was carried out at Ameland (Am), Wadden Sea islands. A typical May feature, northbound passage of summer plumage Black-throated Divers, kept us awake. In NH, 50 were seen in April, another 100 individuals were reported in May (with 65% of all divers specifically identified!). Best days were 4 and 5 May, with 44 ’Black-throats’. Where these birds are wintering remains a mystery, but the total lack of sightings in ZH (which is also true in Red-throated Divers) could exclude the Delta area and rather points at northern France. The main event in May was wader passage. Late April, impressive passage of Bar-tailed Godwits commenced (NH) which continued during the first 4 days of May (ZH). Rather good was Grey Plover migration in the same period. Truely massive numbers were recorded between 7 and 9 May 1991 in NH. On the 8th, over 13,000 waders were registrated, including 6789 Bar-tailed Godwits, 2627 Grey Plovers, 1624 Knot, and 609 Whimbrel. The rest of the month resulted in some Sanderling passage at Schev. Knot were seen every day during the early hours of daylight from the second half of May (maximum 1900 on 18 May). The months of June and July were rather boring. It is worth mentioning that Common Scoters were seen in fair numbers from the second half of June and on(some 1000 per day, Am). Shelduck, on their moult migration to the German Bight, were noticed mainly in July but number remained rather low. On 9 June an immature light phase Pomarine Skua was seen flying south past Westkapelle. Southbound passage of Sandwich Terns commenced in the second half of July. This early, and quite massive return passage, consisted probably of failed breeders. This year’s breeding success in terns was indeed very poor. Information from: NZG/CvZ database, W. Baalbergen, H.J.M. Baptist, J. Bijleveld, J. van Dijk, K.J. Eigenhuis, D. van Elswijk, S. Geelhoed, F. Geldermans, D. Groenendijk, H. Groot, N.F. van der Ham, K. Holleman, A.A. Kraus, F.J. Maas, R. de Mooij, P. Nijhuis, A. Remeeus, D. Schut, R. van Splunder, W. van Splunder, L. Stegeman, H. Verkade, M. Versluys, B. Winters, K. Woutersen, J.N. IJnsen. 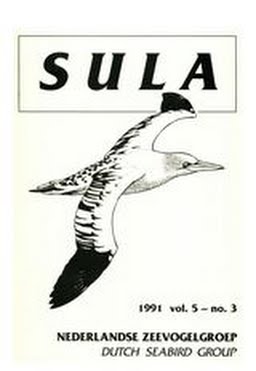