March was a month with frequent strandings of oil at most of our beaches. Rather substantial amounts were found in Zeeland, Zuid- and Noord-Holland, on Texel, Vlieland and Ameland. On Texel, some of the oil remained of the massive oil stranding of 16 Feb. Numbers of stranded birds were relatively small. In Zeeland, many corpses were old, but most were oiled. At the mainland coast, densities were very low, and most corpses were oiled. One British ringed Kittiwake (London EK 14 594) with a green colour ring was interesting (Hbz, 11 Mar). Around Den Helder, numbers of dead Eiders were again massive, but this time, most were heavily oiled (4 Mar, Den Helder, 13.7 Eiders per km, 92.7% oiled, most fresh corpses), indicating a local oil incident. Eiders, some 50% oiled, were common on Texel as well, but only really numerous along the Wadden Sea dike, which was only partly surveyed. At Vlieland, 4.7 Eiders per km were found at the beach, 5.9 per km along the Wadden Sea dike, most of them (probably) unoiled. Some 4 km of beach at Ameland resulted into 73 Eiders, all but one unoiled (18.2/km). These data indicate that the mass mortality of Eiders has continued, and that the crash was partly assisted by oil induced mortality. Auks were not particularly numerous this month, with Guillemots predominating and few fresh strandings. In April, surveys were carried out along the coast of Noord-Holland, Texel, Terschelling, and Ameland. The picture was much the same: many Eiders, rather low numbers of other birds, often oil on beaches, rather old corpses. At Terschelling 3.5 Common Scoters per km were found, which is not surprising considering the massive numbers off Schiermonnikoog and Terschelling this spring. In May, Fulmars stranded in some numbers, including several ’coloured’ (arctic) specimens. As so often in this strandings, few birds were oiled. Entangled birds include a Herring Gull killed in 6-pack plastic around the head, another with the feet lost in nylon thread, and another entangled in nylon thread. One of the more spectacular strandings was the bright orange palm oil stranding late April. Palm oil was found along the mainland coast of Noord-Holland (a little), at Texel (a lot), Ameland, Terschelling, and Schiermonnikoog. Related was perhaps a stranding of 12 tonnes (!) at Norderney (pers. comm. Dahlmann, Hamburg). The source was a collission in the Channel near Dover. A palm oil tanker was ripped open, and many tonnes of palm oil were lost. There is no evidence that any birds were contaminated and died because of the palm oil. Instead, gulls were seen feeding on lumps of palm oil. 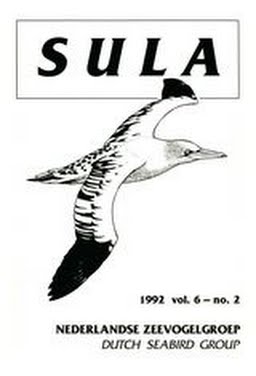