In Sep and early Oct, massive post-fledging mortality of Herring Gulls was reported, mainly on the Wadden Sea islands (MFL, JNY, KD). A mixture of birds was found in Oct and Nov, with the odd Gannet and Fulmar, some Little Auks and very few large auks. Passerines wrecked in some numbers. Late Oct, a survey report from Ameland included Great Crested Grebe, Cormorant, Eider, Common Scoter, Pintail, Shelduck, Oystercatcher, Blackheaded and Herring Gull, a Guillemot, and a Little Auk (JNY). A grebe, a scoter and the beach were oiled. Little Auks were found at more sites (there were also several inland records), including 4 on Voorne on 25 Oct (JAD). On the same count on Voorne, Great Crested Grebes (3), Cormorants (4), several ducks and waders and many Larus-gulls were found. On Schiermonnikoog, mid-Nov, some 10 corpses per km were recorded, including 22 Eiders and 39 Larus-gulls, but also a Leach’s Petrel, 3 Cormorants and a Gannet entangled in fish net (KD). Another Gannet with a rope around wing and bill was found on Texel (MFL), a third was found on Voorne (AD). Eiders predominated in surveys on Ameland and, like on Schiermonnikoog, few auks washed ashore. Counts on the mainland coast of Noord-Holland produced mainly gulls (WBR). Oil was found occasionally and auks were found only in Nov, including Little Auk, Razorbills and Guillemots. One Guillemot was covered in a white, sticky substance, similar to a substance which washed ashore in considerable quantity at that time. A sample is forwarded to the Hamburg laboratory. Cormorants, which have recently become considerably more common in Dutch coastal waters, increase as beached birds. A minority is oiled. Eiders are still found in very large numbers on the Wadden Sea islands. The majority died from starvation. 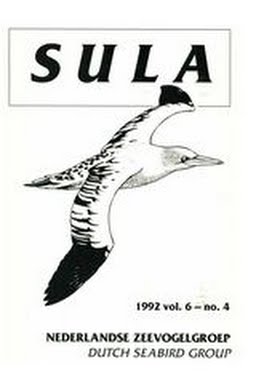