The aim of this publication is to provide a quick overall impression of seasonal patterns and year-to-year variations in numbers of seabirds and coastal birds migrating or staging along the Dutch North Sea coast during the period 1980- 89. An earlier paper on this matter (Camphuysen & Van Dijk 1983) had already elucidated the situation during the years 1974-79, so the attention of this work is restricted mainly towards comparison of seasonal pattern and numbers observed per species between the two periods and an evaluation of some of the most apparent differences found. On the other hand, whilst in the earlier paper hardly any reference was made to the scarce and rare species of birds observed during the systematic counts and no reference at all to any of the observed cetaceans or pinnipeds, the scope of this special issue allowed us to make full comments on any species of non-passerine bird or marine mammal registered. Seawatches in The Netherlands are carried out with some regularity on several observation posts all along the Dutch North Sea coast (figure 1). These posts have been lumped into three different regions, for which migration patterns have been considered separately. These regions are: the North Sea coast of the Wadden Isles (’WD'), the coast of the province of Noord-Holland down to Umuiden (NH') and the coast of the province of Zuid-Holland (’ZH’), including Umuiden in the north and the province of Zeeland in the south. Species descriptions are divided into three main chapters: common and scarce or irregular visitors, rarities, and marine mammals. For common species in the first chapter, the seasonal pattern is depicted in a series of three plots (one for each region) in which the average number of birds per hour passing per week is shown throughout the year. In these figures, birds moving northwestward (’.NW’) are plotted above the xaxis, while birds moving southwestward (’ZW) are plotted below it. Birds observed staging were registered as not migrating (’tp ’) and are not included in the plots. For the sake of comparison, the scale of the y-axis has been maintained equal within each species. Yearly fluctuations in numbers are shown in tables for both common/regular species and scarce /irregular ones. These tables provide total numbers observed per ’spring ’ ('voorjaar', from I January to I July) ami ’autumn’ ('najaar', from I July to 31 December) of each of the ten years for all three regions. Total numbers observed per hour here involve all birds (including the staging individuals) seen in all three regions. In the chapter on rarities all records of the species concerned are mentioned. The general impression is about the same as in the 1970s: seawatches in The Netherlands are dominated by typically coastal species as divers (mainly Redthroated), scoters (mainly Common), Eider, Larus gulls, and terns. Furthermore, a remarkable amount of waders can be seen on their spring migration from wintering areas in southwestern Europe or western Africa to the main staging areas in the Wadden Sea. Especially during the period of mid-April until the end of May, NE-winds favour the observation of 1000s of Ringed and Grey Plovers, Knots, Sanderlings and Bar-tailed Godwits. Among the ’real’ seabirds, the commonest species are Gannet, Fulmar. Arctic Skua, Kittiwake and Guillemot. All seabirds, including even more pelagic species such as shearwaters, Great, Pomarine and Long-tailed Skuas, Puffin and Little Auk, occurred most frequently in autumn (Septemher-November). Especially during spells of heavy (north)western winds, relatively high numbers of these species could he recorded. Most species were seen in higher numbers in the 1980s than in the 1970s. This may he partly due to a southward shift in the distribution of small species offish in the North Sea, which caused a lot of seabirds wintering in the North Sea to move further south than usual. In the case of some species (e.g. Cormorant) the numerical increase directly reflected an increase of the NW-European population. On the other hand, an increase in the experience of the observers may also partly have contributed to this phenomenon. 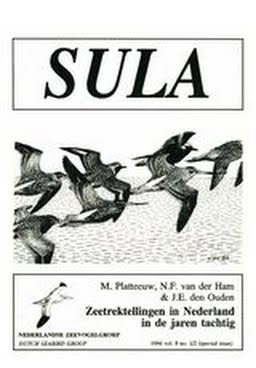