Ageing auks is difficult, even in the hand. Studies of beached birds would be considerably more valuable if Guillemots and Razorbills, among the most numerous casualties in many countries, could be aged routinely or if at least juveniles (first calendar year and first half second calendar year) could be separated. During the last 15 or so years, several external and internal characteristics have been published from which these two auks can be subdivided into juveniles, immatures and adults, or even in juveniles, young immatures, old immatures (sub-adults) and adults (sexually mature). Most these characteristics have been discussed separately, often in reports and ob- scure papers which are now very difficult to trace and obtain. As a refreshment and an update, ageing characteristics are re-described and evaluated using strandings data from the Dutch coast. In Guillemots, the first aspect discussed is the timing of pre-nuptial moult (well visible in the head pattern; figure 1), which is different in adults, immatures and juveniles. Most adult breeding birds moult to full summer plumage in November, old immatures will start moulting in January, younger immatures in February or March and most juveniles will retain winter plumage up until April and often do not even reach a bright summer plumage (table 4). Obviously, there is considerable overlap in timing and the plumage gives no more than an indication. The plumage can be easily classified as W (full winter), W/0 (moult starts), O (moult half way), 0/Z (moult nearly finished) and Z (full summer plumage) or codings of a similar structure. Some 95 % of the juvenile Guillemots have distinct white tips on the greater underwing coverts (figure 2). Silvery white tips without a clear border between grey and whitish should not be classified, birds with grey coverts are immatures /adults. Juveniles retain primary coverts and some of the outer secondary coverts (outer 0-10, usually 2-6), which results into a colour contrast with the neighbouring renewed coverts, visible on clean, dry wings (exaggerated in figure 3). Young Guillemots are slightly smaller than mature birds, but measurements overlap considerably (table 2, figure 6). In Razorbills, the progress of head moult is of similar value as that in Guillemots, while Razorbills generally moult slightly later than Guillemots (tables 4 and 5). An additional ageing character is the development of the bill. Smooth, blackish bills are typical for juveniles (coded 0+0; figure 7). the next year one vertical white band appears, but no grooves in front of that (W+0). Older birds can have up to three vertical grooves in front of the white band (coded W+l, W+2, W+3), but these do not necessarily indicate subsequent years of age. Birds of up to nine years old have been found with only one groove. Complete grooves (visible in upper and lower mandible) count for one, incomplete grooves (only upper mandible) count for 'A (W+'A, W+1A...). Bill characteristics can be used to classify as juveniles (0+0), immatures (W+0) and adults (W+'A – W+3), knowing that the latter category may include quite a few young birds. Accurate descriptions of the bill as such (counting grooves) allow for alternative subdivisions later, when more information may be available. As in Guillemots, juvenile Razorbills can be recognized on the basis of a colour contrast in the upperwing coverts. However, fewer secondary coverts are retained in many cases (often none), so the contrast between secondary and primary coverts should be judged. Razorbills have white underwing coverts, so the white tips are of no use here. Internal characteristics, applicable on both species, include the presence of a bursa Fabricii (between ureters, dorsal side of cloaca; figure 8) and the development of the gonads (figures 9-10). Generally, juveniles have a large bursa (>10mm length), immatures have a small bursa (<IOmm) or no bursa at all, and mature birds have no bursa. Juvenile males have very thin, often bicolor testis, immatures have thicker, sausage shaped uniform testes, and adults have thick or even bean-shaped testes. The left testes (visible on the right when opening a bird on the ventral side) should be measured. Juvenile females have a thin and straight oviduct and no or very tiny follikels visible in the ovarium. With increasing age, follikels grow larger (very large in mature birds near the breeding season), and the oviduct gets thicker and twisted. The diameter of the largest follikel should be measured and the oviduct classified according to figure 10. Age characteristics are summarized in tables 4 and 5. There is much overlap in everything, but a classifica- tion in two (separating juveniles) in Guillemots (contrast and white tips in combination with plumage) under field conditions is possible, while dissections will lead to a further distinction in immatures and (possible) sexually mature birds. In Razorbills, a classification in three is possible under field conditions (contrast and bill development), but the ’adult’ category (W+l and more) will include many immatures. 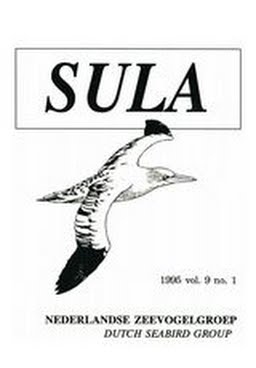