Autumn 1985 produced 17.517 Fulmars Fulmarus glacialis along the Dutch coast and so the largest number of birds ever observed in one single autumn (on average 8.51 birds per hour). 57% of the Fulmars was seen on one day (november 11th). Excluding this day, autumn 1985 did not differ significantly from the two preceding autumns, producing large numbers of Fulmars in the first week of September, mainly at Texel (Wd) and at Hbz and Castricum (NH). The first ten days of november again produced fairly large numbers, but on november 11th Hbz had 27 exx. flying southwards and 9299 exx. flying northwards in 10 hours and Texel came up with 6 exx. flying south- and 590 exx. flying northwards in 4 hours. Other stations more to the south or to the northeast failed to produce any exceptional numbers. November 11th was even more remarkable, when one considers that almost 20% of the birds was ‘coloured’ and therefore of very northernly, arctic, origins. It is suggested that the same (weather-) conditions, that caused the occurence in the first half of november along the Dutch coast of species like Pomarine Skua Stercorarius pomarinus and Little Auk Alle alle in unusual large numbers, caused this influx of ‘arctic’ Fulmars as well. Pomarine Skuas were found to be extremely numerous in november 1985. Exceptional passage was observed on 2 & 3, 687 and 11 november during strong westerly winds. Identification was very problematic at first and, esp. in the early days of hte influx, large numbers of Arctic Skuas Stercorarius parasiticus were reported, presumably as a result of mis-identification. Pomarine Skuainfluxes are well known events in literature. Several influxes are described with the influx of 1879 being the most impressive one. The 1985 influx may well have been the second largest invasion of this species into Western Europe during the last 150 years. What caused the 1985 influx is not very clear. Pomarines were already present in the North Sea, feeding around fishing fleets, in October, when the weather was very fine indeed. The stormy weather in november has certainly not been the cause of the influx, but may have contributed to the large passage-movements along the Dutch coast in november. The large number of Juvenile skuas suggests an exceptional breeding succes in 1985. It is not known whether or not an invasion like this one can be explained by larger numbers as a result of good breeding succes or as a result of unusual migration-routes. As with several other species of seabirds, autumn 1985 also produced exceptionally large numbers of auks (Razorbill Alca torda and/or Guillemot Uria aalge). The hourly mean was 10.6 (fig. 5.3.1) and, as usual, most birds were seen in NH (71%; n= 21.766). Practically all (98%) specifically identified auks were Guillemots. As can be seen from fig. 5.3.2, the fraction of Guillemots among the identified auks has drastically risen since 1980, carefully suggesting that the recent increase in auk-numbers along the Dutch coast is wholly caused by an increase in the numbers of Guillemots. Most of the auks this autumn (fig. 5.3.3) were seen between October 29th and november 4th, when 73% of the autumn-total was recorded: november 2nd & 3rd produced 10.446 auks in 39 hours at Egmond and Hbz (NH) and Texel (Wd); most other stations saw no exceptional numbers. Since most (99%) birds flew northwards, it is suggested that the present phenomenon might be caused by birds, returning to favourable feeding grounds to the NW of Texel, after the nov 2nd storm caused them to drift southwards. The southward-movements, observed at Texel in the second week of december, might then be caused by these feeding grounds having become exhausted, and the birds leaving in search of new feeding grounds. As breeding plumage Guillemots,from october onwards, are known to be fully adult, plumagenotes have been investigated and suggest, very carefully, that most Guillemots along the Dutch coast are immature, non-breeding, birds. The number of observed Razorbills (n=37) was too small to even try to analyse the species’ occurence. Also the Little Auk was seen in autumn 1985 in previously unrecorded numbers (n=181). Although this is unprecedented by Dutch standards, on an only slightly more encompassing scale such numbers are trivial, as the species is a rather common wintererin the North Sea, eg. near Denmark. 84% of the Little Auks was seen during the socalled invasion period, October 27th- november 13th. As with the Pomarine Skua, the storms in the first week of november can not be clained as the ‘cause’ of this ‘invasion’ as the birds were already present in unusual numbers before the depressions reached the country. The Little Auk remained unusual ‘common’ from half november onwards, again as aws the Pomarine Skua. 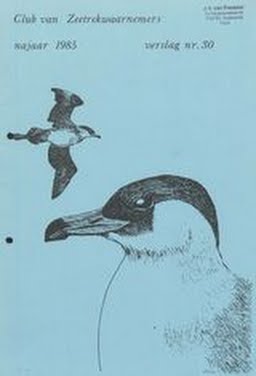