Results of the studies of odonate fauna, carried out in July 2006 in the odonatologically almost unexplored Vasyugan Plain, are presented. The studies concentrated in the northern and northeastern parts of the largest bog in the world, the Vasyugan Bog, and its surroundings. Large primeval complexes of Sphagnum bogs and fens and other accompanying habitats, man-made as well, were studied. 25 localities are briefly described and the occurrence of 35 recorded spp. is commented. Due to almost total absence of typically East Palaearctic spp. (only Shaogomphus postocularis found), the aspect of the odon. fauna in the studied area is similar to a certain degree to that known from central and eastern Europe, but with some differences in the species composition, abundance of many spp. and their habitat preferences. In Coenagrion puella, C. pulchellum, Enallagma risi, Nehalennia speciosa, Gomphus vulgatissimus, Shaogomphus postocularis, Somatochlora flavomaculata, Leucorrhinia albifrons, and L. pectoralis, the northern limit of their distribution appears further N than it was previously known. This suggests that the actual northern range limit of some of these species in W Siberia does not descend as sharply to the S as it was expected. The first known site of S. postocularis W of the Ob’ river and on a perfect plain is also worth noticing. Among the most remarkable discoveries was the regular, area-wide occurrence of several previously poorly known in Siberia spp., such as N. speciosa, Aeshna subarctica, G. vulgatissimus and S. flavomaculata. Taxonomically interesting is the coexistence, in the studied area but not at the same localities, of two taxa considered as subspecies or separate species, E. c. cyathigerum and E. (c.?) risi. The fact of clear spatial separation and at most a minimum degree of intergrading (if any) of these 2 taxa suggests their full species status which would agree with morphological and recent molecular data. The regular and not rare presence of 2 androchrome Calopteryx splendens 9 forms and d 6 with the wings coloured to the tips, as well as the occurrence of brownish wing ‘smoking’ of many 9 S. flavomaculata and S. arctica are peculiar features of the Vasyugan odon. aspect. The 6 segregation in the ‘triangle’ of peat bog aeshnids, Aeshna crenata, A. juncea and A. subarctica, IS described and discussed. Between A.juncea and A. subarctica it was very advanced, partially spatial and partially weather/temporal, between A. crenata and A. subarctica almost complete, spatial, and between A. crenata and A.juncea advanced, weather/ temporal. These observations confirm the dominant position of A. crenata over the water table, and also suggest the lack of crenata-dominance off the water table. The reliability of adult diagnostic features, more and less commonly used to distinguish between A. subarctica and A.juncea, is discussed. 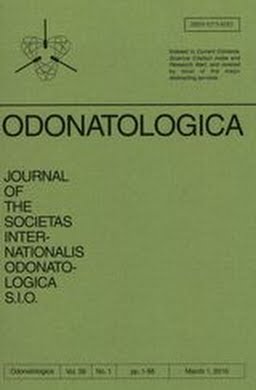