Searching for ”Sosomuco” and the ”Rio Negro”

Any student of South American dragonflies may have considerable trouble to trace a locality in Colombia mentioned by F. RIS (1918, Arch. Naturg. (A) 9: 1-197) as ’’Sosomuco” [sic!]. The same name appears also in the lepidopterological literature as, for example, in H. NEUSTETTER (1929, Lepidopterorum Catalogus, pars 36, W.-Junk, Berlin), and as ”?Susumuco” [sic!] in B. D’ABRERA (Butterflies of the neotropical region, Part II, Hill House, Victoria, Australia), — Probably all these citations refer to material caught by the known German collector A.H. Passi. He himself (FASSL, 1915, Em. Rdsch. 32; cited by Ris, 1918 (cf. above, p. 3) explains that the traveller reaches "Sosomuco” in about two days after passing over the eastern Cordillera near Bogota, at an elevation of 3200 m. "Sosomuco” itself is situated at about 1000 m, and 200 m above the "Rio Negro”, a torrential mountain river. For several years I was searching in vain for "Sosomuco" on the maps of Colombia. I began to suspect an orthographic error and was inclined to take Sogamoso (Dept of Boyaca) as the true locality. This town lies, however, at 2570 m above sea level, and is too far from Bogota to be reached within two days (in Fassl’s times). Similarly, Somondoco, a village situated south east of Choconta (Boyaca) at 1670 m, seemed still too high. — Then, recently, and thanks to the kind help of Ing. F. Cerda, of our Institute, I had the opportunity to study a splendid map of Venezuela, which includes a part of the Colombian eastern Cordillera (Aero Service Corp., Philadelphia, PA, U.S.A., revised ed., 1964, 1:1,250.000) To my satisfaction, I at last discovered the site: Quebrada Susumoco [sic!]. A village is not indicated, but in Fassl’s times a custome-house was there, which served to him as a starting point for his collecting. No doubt, still nowaday a "reten” (check point) of the police may be established at this place, which is situated close to the boundary line between the Departments of Cundinamarca and Meta, on the road from Bogota to Villavicencio, at an elevation between 860 and 1000 rn. In fact, a river called Rio Negro passes below, as mentioned by Fassl. 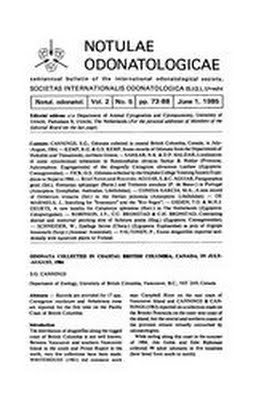