Incidental breeding attempts of Peregrine Falcons had been recorded throughout the 20th century, but this had never resulted in a functional breeding population. This changed in 1990, when a breeding pair of Peregrine Falcons settled in the southern Netherlands. Initial population growth was exceedingly slow till the late 1990s and early 2000s, then increased exponentially till 125-135 pairs were recorded in 2013 (Fig. 1). This development was in concert with the trend in nearby Germany (notably Nordrhein-Westfalen and Baden-Württemberg), where the population had partly recovered by 1990 and started expanding its range. The Dutch population was closely tracked during the initial decades when numbers were still small, but in later years pairs and territories must have been overlooked (though presumably slightly so). In the period 1990-2013, 734 occupied territories were recorded (a territory may have been in use for more than one year). All territories except one were occupied by a monogamous pair; the exception relates to a male with two females that occupied a territory for 12 years in succession. Of 235 males checked, 73% carried a ring, of 298 females this was 61% (Table 1). Males originated from breeding sites in The Netherlands (54% of identified rings), Nordrhein-Westfalen (36%) and Belgium (10%), females from Nordrhein-Westfalen (46%, 156 rings identified), other parts of Germany (22%), The Netherlands (17%) and Belgium (15%) (Table 2). It should be remembered that a large proportion of chicks in Germany, The Netherlands and Belgium is being colour-ringed (in The Netherlands and Nordrhein-Westfalen, for example, annually some 70%). Of Peregrines breeding in The Netherlands, males were more often of local origin (i.e. from Dutch breeding sites) than females; the latter often originated from breeding sites in Nordrhein-Westfalen (Figs. 2 and 3). Natal dispersal of Peregrines breeding in The Netherlands averaged longer distances in 1990-2008 (average population growth 21.6% per annum) than in 2008-13 (average population growth 27.6%/annum), and for both periods covered longer distances (about twice) in females than in males (Table 3). For the entire period, 1990-20013, natal dispersal averaged 57 km for males and 125 km for females. Based on the identity of 116 ringed males and 153 ringed females, the average age of breeding males in 1990-2013 was 5.0 calender-years (range 1-11), for females 6.2 (range 2-16). Colonisation of The Netherlands started with males occupying potential breeding sites, often as juveniles. In the following years they then attracted a mate (either adult or juvenile) and started breeding. First settlements on average involved younger birds than when existing territories were taken over, i.e. age of first breeding being resp. 2.4 and 3.4 calender-years in males (up to 5 cy), and resp. 3.2 and 4.3 calender-years in females (up to 8 cy). Territorial shifts were only recorded in females, with on average displacements by 14.6 km (range 1.6-49.3 km), never in males (100% site fidelity, also never intermittently absent). Territory occupation up to the moment of disappearance lasted on average 6.1 calender-years in males (N=7, range 2-11 cy), and 7.9 calender-years in females (N=13, range 2-16 cy). Disappearences most likely equate with death, as shown in four males (found dead or diseased in the vicinity of the nest site, partly a result of territorial fights) and five females (ditto, 4x territorial dispute, once shot). Before females settled down as breeding bird, they had been floating in the vicinity for some years; six females eventually occupied a breeding territory 13.3 km away from where they were first seen (SD=4.2, range 6.8-21.0 km), at an average age of 3.5 calender-years. This is suggestive of females being intimately acquainted with a small area before settling as a breeding bird. Males followed another strategy. Of six identified individuals, only one was recorded near a breeding site in the pre-settlement stage. Their first breeding took place at sites on average 40.3 km away from where they were first observed (SD=35.7, range 19.1-119.9 km), with an average age of settlers of 3.5 calender-years (SD=0.87, range 3-5). 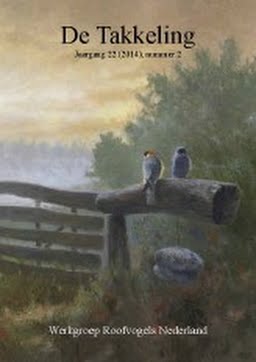