Raptor flights were recorded from ground-based observation points on the Veluwe (1972-90) and (mostly) from tree tops in Drenthe (1990-2014). During the period 1 July through 20 August, when most observations of raptors referred to local breedings birds, with some early migrants (mostly Honey-buzzards Pernis apivorus) and early dispersal of juveniles (mostly Kestrels Falco tinnunculus), a total of 1752 observation hours on 522 days were spent in watching the sky (Appendix 1), with 94% of all observation hours between 8.00 h and 16.00 h summertime, the period that raptors were most active above tree level (Fig. 1, Appendix 2). The trend derived from these late summer counts was used as validation for trends revealed by nest surveys of local raptors in fixed study plots, under the assumption that high breeding numbers and high breeding success should be reflected by high numbers recorded in late summer (July-August). The sky was searched continuously with the naked eye for flying, gliding and soaring raptors, of which – when possible – species, age, sex, flock size, moult, crop, flight altitude and behaviour were recorded. Flight altitude was estimated in five categories, i.e. low (just above tree level), rather low (up to 2-3x tree level), mid-high (clearly visible and species – but often not age or sex - identifiable with the naked eye), high (clearly visible but difficult to identify to species with the naked eye) and very high (just specks, identifiable to species with 10-15x binocular, but rarely to sex or age). Apparently, birds flying in the rather low category were often misjudged as to altitude, and were joined with the ‘low’ category. This resulted in four categories, which – based on the distribution of flight altitudes of Honey-buzzards equipped with a datalogger (van Diermen et al. 2009) – may be equivalent to approximate altitudes of respectively <100 m, 100-250 m, 250-500 m and 500-1000 m. Accordingly, of 4638 raptors recorded with flight altitudes, 42% was observed at <100 m, 30% at 100-250 m, 21% at 250-500 m, and 7% at 500-1000 m. Birds with large wing spans were on average seen more often at high and very high altitudes than those with smaller wing spans (Fig. 3), as were birds in flocks (especially when flying in threes up to and including 20 birds, proportionately more raptors were recorded at high and very high altitudes; Fig. 4). This longitudinal study, started in 1972 and performed by the same observer up to and including 2014, showed that the proportion of raptors flying at very high altitudes sharply and consistently declined to fewer than 5% from 2003 onwards (average proportion for 1972-2014 is 7.4%). This decline coincided with the simultaneous notion that the observer’s long-sight had started to deteriorate (when 48 years old, recognized as having difficulties reading calipers and small bird rings). It is likely that the observer’s short-sighted prowess also had started to deteriorate by that time, to such an extent that detecting specks in the sky has become a rarity. In terms of monitoring, this equates to a loss of at least 0-15% of all raptors, depending on species, a loss that is entirely based on declining sight of the observer. Whereas it is now fully acknowledged that ageing birdwatchers represent a significant problem for the reliability of monitoring schemes of breeding birds, due to impaired hearing, it seems that impaired sight among ageing birdwatchers is adding further trouble, at least to monitoring schemes using migration counts. 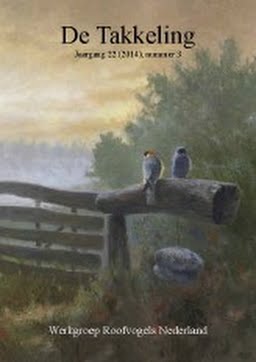