The author gives the results of his research on the distribution of Cernuella virgata (Da Costa) in the Netherlands as compared to that in other countries in western Europe. Dutch C. virgata seem to be as variable as elsewhere; about a dozen formae in size, form and colour of the shell have been recognized. These variations are due to population variability and the influence of ecological factors. No populations with closely similar shells are found in the Netherlands, all are very heterogeneous. The life cycle lasts one year. The breeding season extends from late summer to early autumn. The eggs are deposited just under the surface in the soil, mainly among the roots of the vegetation. Hatching occurs in 15-20 days. The shell of the young animal is corneous in colour. In spring they move up to the surface and in late summer they reach maturity. In the Netherlands C. virgata exclusively occurs in dry open places such as dikes, roadsides, fallows and dunes. These are localities with a rather poor mollusc fauna (Cochlicopa lubrica, Pupilla muscorum, Vallonia pulchella, V. excentrica, V. costata, Discus rotundatus, Oxychilus draparnaudi, Candidula intersecta, Trichia hispida, Arianta arbustorum, and Cepaea nemoralis). C. virgata is often found feeding on Plantago lanceolata, P. major, P. coronopus, Achillea millefolium, Taraxacum officinale, thistles, and grasses. They are frequently found on the faeces of rabbits (Ireland), sheep, and horses. During the daytime the snails are usually seen adhering in clusters to the stems and leaves of the various foodplants. During long periods of dry hot weather, strong wind or heavy rains they seek shelter by burrowing between the roots of the plants. When the weather changes they appear suddenly in large numbers. In England C. virgata has many enemies and parasites; in the Netherlands the species is found at “thrush stones” indicating that it is occasionally eaten by Turdus species. No other records of predators are known from this country. C. virgata is widely distributed in western Europe and the Mediterranean region and is known as an alien in some territories of Australia. These snails extend their range continuously, partly in the wake of Man. In the Netherlands the species has been reported for the first time in 1874, when it was found on a dike near Medemblik. This species does not belong to the Dutch mollusc fauna proper and obviously has been introduced unintentionally. So far it is only known from the province of North Holland. The map (fig. 4) shows the localities where the species has been found. In this paper a complete review is given of Dutch literature on the distribution of C. virgata in the Netherlands. Also much attention is paid to the records in the files of the “Molluskencomité” and some private collections of members of the Dutch Malacological Society. In 1967 the author has found the species living at 17 localities, seven of which were situated along the former Zuiderzee dike, eight in the Wieringermeer and on Wieringen (a former Zuiderzee island) while two other localities were recorded from along the Pettemer Zeewering. In the Netherlands the species is now known from 23 localities. The former Zuiderzee dike has played an important role in the dispersal of C. virgata. From this dike the Wieringermeer has been invaded. The Pettemer Zeewering has probably also been populated by specimens from the Zuiderzee dike. Transport of stones from the Zuiderzee dike to the Pettemer Zeewering has most probably aided in the dispersal. The presence of many dikes and roadsides, which are its favourite habitat, will possibly further dispersal in the future. At this moment there is no reason for either control or protection of C. virgata in the Netherlands. 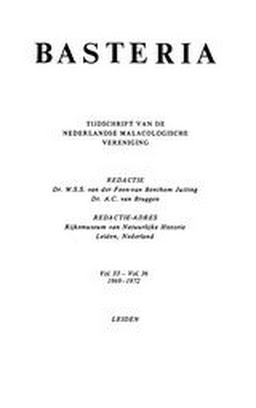