Probably because they had difficulties in finding a sharp morphological border-line between both species, a number of authors considered Bittium¹ latreillii² (Payraudeau, 1826) a variety (Bucquoy, Dautzenberg & Dollfus, 1884: 214; Priolo, 1956: 291) or a subspecies (Nordsieck, 1968: 68; Parenzan 1970: 105) of B. reticulatum (Da Costa, 1778). Richter & Thorson (1975: 128), however, demonstrated that the sculpture of the larval shell is different in both species, and very constant in each of them. This induced me to closely examine adult material of B. latreillii, B. lacteum (Philippi, 1836) and B. reticulatum with its allied forms³ jadertinum (Brusina, 1865), scabrum (Olivi, 1792), and paludosum Bucquoy, Dautzenberg & Dollfus, 1884. In none of these the spiral ridges do develop simultaneously on the juvenile shell. The lower two ridges, those on the base not counted, always appear first, and develop about simultaneously. Before long a third ridge appears above these two. In B. latreillii and in B. lacteum this third spiral ridge soon becomes equally strong as the older two, so that juvenile specimens of these species soon show three very regular and similar spiral rows of tubercles. Now it is a character of B. latreillii that a fourth spiral row of tubercles appears between the uppermost and the lower two of these three rows, and that from the beginning this fourth row is fully separated from the neighbouring ones. It often appears on about the eighth whorl, but may occasionally even appear only on one of the last whorls of the adult shell. Within little more than one whorl, this fourth row of tubercles develops from non-existent to as strong as the other three rows, see fig. 2. In B. reticulatum and its allied forms the fourth spiral ridge (as before counted according to age, and not to position!) develops either about simultaneously with the third ridge, or above that ridge, see fig. 3. This, of course, only applies to those specimens of B. reticulatum s.l. on which a fourth spiral row of tubercles appears at all. The apical dimensions of both B. latreillii and B. reticulatum s.l. are about 0.08/0.12 mm; the first one of these measurements is the diameter of the nucleus of the shell, the second one that of the first half whorl (fig. 1). B. latreillii is a very common species, widely distributed in the Mediterranean, where the shells may have either four or five spiral ridges or rows of tubercles on the last whorl, those on the base not counted. The fifth spiral row of tubercles, if present, appears just below the uppermost one in exactly the same way as does the fourth row, (still counted according to age, and not to position), but that the fifth row appears a few whorls after that row. 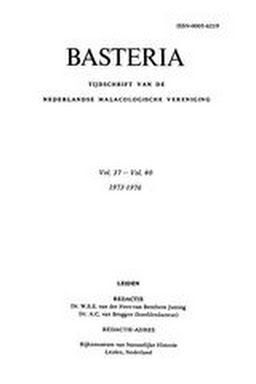