On 1 August 2014, an adult female Honey-buzzard visited a small Frisian village where she depredated a wasp nest in a garden and was recorded flying towards an unknown nest site. That same day, an hour later, probably the same female returned. The wasp nest was staked out with a wildlife camera. An adult female was again seen on 2 August, but for a short time only. On 3 and 4 August, however, a Honey-buzzard carrying a wasp comb was recorded flying overhead, presumably from a wasp nest nearby (no images on camera). More visits to the wasp nest were recorded visually and with a wildlife camera, showing that two different males were involved (including the one which had been captured at its nest; he was identified by the brand new ring and the visible part of the ring number that had been stamped on its flight feathers). All together, the wasp nest was visited by two different males and one female between 1 and 20 August; the wasps partly repaired their nest after the depredations, and some activity was still under way on 1 November. The foraging flights between wasp nest and Honey-buzzard nest eventually led to the discovery of the latter’s, at a distance of 4.2 km from the foraging site in the garden. The nest contained two chicks, one of which was sufficiently grown to take flight when the nest was approached. On 6 August the adult male was captured near the nest; biometrics were taken, and after ringing (and stamping the ring number on each flight feather, see above), the bird was released. The female was captured as well, but she escaped before the bird could be taken from the net. Also, the almost fully grown youngest chick was ringed that day, enabling the calculation of onset of egg laying (26 May) based on age-identification using wing length. After fledging, a wildlife camera was placed near the nest to continue recording activities at the nest, with the first-fledged chick frequenting the nest up to and including 24 August (when the male delivered a prey; the female presumably had departed some days previously, leaving the care for the fledglings to the male). No activities of Honey-buzzards were recorded on the nest after 24 August, probably indicating departure from the site and start of autumn migration, but Wood Mice Apodemus sylvaticus (up to three, probably eating from the remains of wasp combs) continued frequenting the nest (8 m high, in Scots Pine Pinus sylvestris) at night. Food remains collected on the nest showed that wasp brood was the sole food taken, i.e. 17 combs of Vespula vulgaris (mean diameter 132 mm, SD=23.7, range 80-160 mm; 16 with worker cells, 1 with queen cells), 5 combs of V. germanica (mean diameter 85 mm, SD=14.8, range 70-100 mm; 2 with worker cells, 3 with queen cells), 2 combs of V. rufa (diameter 75 and 85 mm, both with worker cells), 5 grey combs (either germanica or rufa, mean diameter 87 mm, SD=15.7, range 70-115 mm, all with worker brood), and 1 comb of Vespa crabro (diameter 70 mm, worker cells). Also, many combs of V. vulgaris were found as débris, trampled into small fragments by the nestlings. 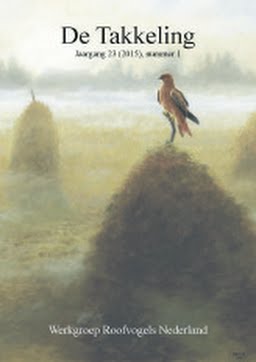