Since the pioneering study of Tinbergen (1936), very little had been published on Goshawk Accipiter gentilis diets in The Netherlands up till the 1970s when Opdam et al. (1977) and Van Lent (2004) rekindled the interest in raptor diets, resulting in a plethora of studies across The Netherlands until the present day. Recently, a lost student report surfaced describing Goshawk diets on Veluwe and in Drenthe in 1955 and 1956 (Jager, to be published in 2017), a fortunate addition to the knowledge of Goshawk diets in the mid-20th century. The present study focuses on the racing pigeon Columba livia as prey of Goshawks on the Veluwe (1974-2015) and in Drenthe (1982-2016) during the breeding season (March-August). Each year between 800 and 1300 h of fieldwork were devoted to field studies, during which Goshawk nests were located and visited, and prey (pluckings, prey remains and pellets) were systematically collected around/on nests and in fixed random plots. Of plucks of racing pigeons, plumage was described as being grey, pied (including brown and reddish) or white. In conjunction with the collection of prey remains, flights of racing pigeons were monitored and timed on Wednesdays, Saturdays and Sundays, i.e. numbers, flock size, flying height, plumages (grey, pied, white), and Goshawk attacks (yes/no, outcome). Although initially collected to compare plumages of passing pigeons with those of pigeons captured by Goshawks, the data were also helpful to monitor numbers of racing pigeons over time (annual average passing per hour in June-August). In the study areas of Veluwe and Drenthe Goshawk numbers increased in the 1970s and 1980s, but declined in later decades. This decline was accompanied by a delay in laying dates, declining reproductive output and lower body masses of surviving nestlings (only for the later born chicks within a brood, and especially females; van Manen 2011). In parallel with declining numbers and reproductive success of Goshawks, the proportion of racing pigeons in Goshawk diets steeply declined, from around 30-40% of summer diets in the 1980s to 20% (Veluwe) and 5-15% (Drenthe) in the 2000s. In parallel with this decline, the number of pigeon rings collected at Goshawk nests also declined, from an average of 2-7 rings per nest in the 1970s to 0-2 in the 2000s (most nests without rings). These trends were in conjunction with the trend of pigeon numbers passing during racing flights, which showed a decimation in the period of 1972-2016. For Drenthe, in the period of 1982-2016, the number of racing pigeons captured by Goshawks correlated with the number of pigeons passing during racing flights (averaged per year, June-August; overall 5407 preys collected, of which 925 racing pigeons). Across The Netherlands, and for the period of 1932-2016, the proportion of racing pigeons in Goshawk diets varied temporally and geographically, with comparatively small proportions in the 1930s, much higher values in the 1950s-1980s (when numbers of pigeons and pigeon fanciers are believed to have peaked), and again smaller proportions later on; throughout this period, pigeons figured prominently in diets of 206 De Takkeling 24(3), 2016 Goshawks breeding in the central, southern and eastern Netherlands. The decline of racing pigeons in Goshawk diets since then is thought to relate to declining numbers of pigeon fanciers (and hence pigeons). This decline is probably smallest in the southern Netherlands (Noord-Brabant, Limburg), where racing pigeons still take some 30% of summer diets of Goshawks (Table 2). For Goshawk breeding sites on Pleistocene sands in the central and northern Netherlands, a poor habitat type with fewer pigeon fanciers than in the southern Neterlands, the decline of racing pigeons coincides with declines of other important prey species, like Woodpigeon Columba palumbus (in woodland, not in villages), corvids, Starling Sturnus vulgaris and Rabbit Oryctolagus cuniculus. The poor performance of Goshawks (trend, reproduction) in recent decades is therefore no surprise (although other factors, like senescence, density-dependent effects, polluted food chain, habitat fragmentation and increased frequency of intraguild predation, cannot be excluded as confounding factors). 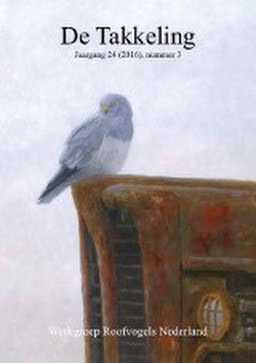