Abstract Changes in the moss vegetation of the Nieuwkoopse Plassen (De Haak included) between 1967/1972 and 2009/2013. 1. Description of the area – Earlier moss data – Changes in four transects in terrestrializing vegetation zones. The Nieuwkoopse Plassen (De Haak included) form a lake and fen area in the north-eastern part of the Province of South-Holland. It is located on the edge of the former raised bog in this part, which was drained and subsequently dredged for peat. Until 1967 not much was known about the bryophytes in this area. A summary of the earlier and some later data on the moss species is given. In 1967, the author did a doctorate study of the vegetation of the Nieuwkoopse Plassen in the Polder Nieuwkoop en Noorden, followed by some more research in the years afterwards. In 1971, her brother J.J. den Held did a doctorate study of the vegetation of De Haak, located southeast of the Nieuwkoopse Plassen in the Polder Achttienhoven. Four transects consisting of relevés in the terrestrializing fen vegetation investigated in 1967/ 1972 were examined again in 2009 by Vincent Crétin, a student guided by the Wageningen University. In this article, some results of this study are described, with a focus on the mosses. Two transects, made in 1971, are located in De Haak, in a relatively young vegetation, terrestrialized after 1900, and zoned from floating rich fen (or quagfen) to young sphagnaceous reedland with mosses like Calliergon giganteum, Scorpidium scorpioides and Riccardia multifida in the wetter stages. In 2009, nearly all rich fen mosses had disappeared. Two other transects are situated in the Polder Nieuwkoop en Noorden. One of these is located in a somewhat older but also still relatively young parcel, and with the reed cut in winter for roof-thatching, whereas the litter was burned. In the wetter zones only rather eutrophic mosses were found, in 1972 as well as in 2009. The other transect, made in 1967, is located in a relatively old parcel, terrestrialized before 1900, and for the last fifty years probably mowed in summer. In the rather narrow bank zone some rich fen species like Campylium stellatum and Rhizomnium pseudopunctatum were still present in 1967, but they had disappeared in 2009. Because of the water composition, especially the low calcium content, of the surface water in recent times (from about 2010), it remains to be seen if new quagfens will develop. In all transects Sphagnum fallax and Polytrichum commune had diminished, while Sphagnum palustre had increased considerably. In the sphagnaceous parts of three of the transects, some raised bog mosses had established in 2009: Cephalozia macrostachya, Cladopodiella fluitans, Kurzia pauciflora and Sphagnum magellanicum. In the parcel with the severe mowing and burning regime there has been rather an opposite development: the wet heather/bog plant Erica tetralix disappeared and species like Brachythecium rutabulum, Kindbergia praelonga and Mnium hornum settled in the sphagnaceous reedland. In a following article, comprising more repetitive relevés, mainly in the sphagnaceous reedlands, further results and conclusions will be presented. 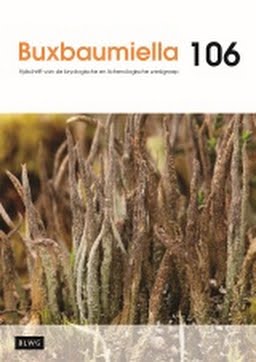