Observations of Short-toed Eagles in The Netherlands, insofar submitted to www.waarneming.nl (a website active since 2003, and widely and increasingly used by birdwatchers to put their data online), have been analysed up to and including 8 September 2017. Between 1990 and 2017, a total of 5560 observations of 6242 Shorttoed eagles have been submitted, mostly as a single individual, but 494x two birds, 63x three birds and 21x four birds. The number of observations steeply increased since the early 2000s, with a small dip in 2013-15, and another upsurge to almost 1000 observations in 2017. Summering was first noted in 1996 and 1997 (at Hoge Veluwe, a nature reserve with heaths and woods in the central Netherlands), then again in 2001-02 (Fochteloërveen, a nature reserve on peat in the northern Netherlands). Since then, summering increased in frequency, duration and space use, with some exchange between nature reserves. An analysis of the data, greatly helped by 1000s of photographs linked to observations put on waarneming.nl, revealed that two birds in a single area (Hoge Veluwe) were present in 1996-97, increasing to seven different individuals frequenting eight separate reserves in 2017. In favoured nature reserves, mostly heathlands with fens surrounded by woodland, the duration of presence increased to 13-17 weeks in Fochteloërveen and Hoge Veluwe in 2017. The great majority of birds, and all nature reserves used for at least several consecutive weeks, were found north of the rivers Rhine, Waal and Meuse, despite the fact that south of these rivers apparently similar habitats are also available. This discrepancy is correlated with disparate diversity and abundance of snakes between regions, with often three species (Coronella austriaca, Natrix natrix, Vipera berus) occurring in nature reserves on sandy soils and peat bogs in the northern Netherlands. South of the Meuse, Natrix natrix and Vipera berus are lacking, whereas Coronella austriaca is restricted to few and small nature reserves. The impact of snake diversity and abundance on the (duration of) presence of Short-toed Eagles is even visible within districts, like for example in the province of Drenthe in the northern Netherlands. Here, all three snake species are widely dispersed and abundant in nature reserves west of the Drentse Hoofdvaart (a canal running north-south, dividing the province in two parts), whereas Natrix natrix is scarce in, or absent from, most nature reserves east of the canal. Mirroring the snakes, Short-toed Eagles are absent, or present for short intermittent periods of time only, west of the Drentse Hoofdvaart, in contrast to nature reserves east of the canal where several Short-toed Eagles showed up for many years and extended periods of time within years. Age-identification, as recorded in waarneming.nl, is fraught with errors. Based on a reanalysis of 3750 photographs in this database, it seems, however, that few juveniles are involved, most Short-toed eagles showing features typical of immature birds. Only two individuals could be identified as adult (presumably females), interestingly both residing in nature reserves with the longest history of summering birds (Hoge Veluwe and Fochteloërveen). Moult scores taken from photographs showed that in late summer juveniles often moulted primary 1-3 (counted descendently), immatures often primaries 1-4(5), rectrices 1 and/or 6 (outer- and innermost) and once primary 9, whereas the two adults were very different in that they moulted primary 9 (both birds), primary 7 (one bird), and primary 6 (the other). Also remarkable: despite the increase in the number of summering Short-toed eagles in The Netherlands, this is not reflected in a similar increase in adults. The large majority of summering birds was, and still is, in immature plumage, i.e. presumably less than 5 years old. In combination with the comparatively short maximum duration of stays in preferred areas (up to 13-17 weeks), the prospects for breeding are still rather bleak. On the other hand, two nature reserves are particularly promising, i.e. Hoge Veluwe (5500 ha) and Fochteloërveen (3400 ha, including Forestry of Veenhuizen), based on the annual recurrence of more than one bird (not necessarily the same), and the longest stays within a season. Both reserves are large (in a Dutch setting) and known for their snake abundance and diversity. 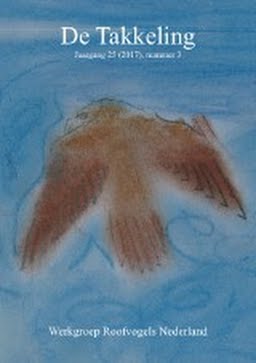