Since its settlement in The Netherlands as a breeding birds, in 1990, Peregrines have been closely tracked by raptorphiles, especially since the inception of the Dutch Peregrine Group in 1995. The breeding population increased to some 200 pairs in 2018. Many pairs breed in nest boxes, where prey remains are collected during nest visits. Between 21 April 2001 and 28 March 2018, a total of 10,546 birds in 113 species and 19 mammals (14 of which bats) were collected, mostly (88%) referring to prey captured during the breeding season. Many prey remains collected during winter checks of nest boxes, for cleaning purposes, refer to prey killed during the previous breeding season (and have been labelled as such). The prey collection is based on a large number of localities throughout the country, 73 in all (some sites within 1-2 km distance of each other have been lumped), of which 17 were visited in only 1 year; 10, 10, 5, 10, 7, 3, 6, 1, 2 and 2 sites were respectively checked in 2-11 years, not necessarily consecutively. Species diversity of prey lists increases with number of preys collected, but variation is largely depending on whether nests were located along the coast (where waders are abundantly available and spring migration is concentrated) or inland (where the prey base is poor, especially in farmland). Irrespective of such local and regional variations in prey base, very few species were commonly captured, notably racing/domestic/feral pigeons Columba livia (here combined, but racing pigeons accounting for 83% of 4063 pigeons specifically identified as either racing, fancy or feral), Starlings Sturnus vulgaris, Swifts Apus apus and thrushes Turdus sp., with resp. 39%, 17%, 14% and 9% in numbers. In terms of weight, racing pigeons are the single most important prey species, accounting for 67% of avian prey biomass. Prey weight varied between 6 g (Goldcrest Regulus regulus) and 1700 g (Barnacle Goose Branta bernicla). Prey weights of birds captured showed a bimodal distribution, with peaks in the classes of 51-100 g and 201-400 g, possibly largely corresponding with sex-specific differences in prey choice (males probably opting for smaller prey, although both sexes are known to capture racing pigeons, the latter weighing on average 375 g). The spatial variation in the proportion of racing pigeons in Peregrine diets showed a functional response to the density of pigeon fanciers across the country (and hence, pigeon numbers). Racing pigeons particularly abounded in Peregrine diets during March-June, i.e. corresponding with the Peregrine’s breeding season and the early part of the homing season of racing pigeons (April-September). The proportion of <1 year old pigeons in Peregrine diets increased steadily from May onwards, i.e. the month that pigeon fanciers start training young pigeons. Overall, 37% of 2887 pigeons killed were less than 1 year old, 38% 1 year old (i.e. born the previous year), with steeply declining numbers for older ages up to 16 years old. Taking into account the daily prey consumption of Peregrines (averaged for ages and sexes at 200 g, including waste), the number of breeding pairs (c. 200 in 2018), a mean number of two fledglings per pair, a breeding season of 183 days (April-September), and the biomass proportion of racing pigeons in diets of Dutch Peregrines (67%), it is estimated that annually at least 52.314 racing pigeons are taken by Peregrines. The number of pigeon fanciers in The Netherlands in 2018 was c. 18.000, each fancier keeping on average 50-100 pigeons. This translates into the presence of 900,000-1,800,000 racing pigeons, an estimate in close agreement with the c. 1,000,000 rings issued each year by the Dutch Fanciers Organisation (for young pigeons, suggesting a population of at least 500,000 pairs, hence at least 2,000,000 pigeons in total). The annual predation by Peregrines is estimated at 2.9-5.8% of all racing pigeons (mean 3.9%), i.e. slightly higher than estimated for Goshawks Accipiter gentilis (0.2-2.5%) but still small compared to an annual mortality of at least 50% (among <1 year old pigeons; annual mortality as given by pigeon fanciers was stable at 28-35% in 2002- 2014). Given the importance of racing pigeons for Dutch Peregrines, the future development of the homing sport is of great interest. The number of pigeon fanciers has been declining steadily since at least the mid-1980s, with a decline in the number of local clubs from 2014 in 1985 to 1190 in 2000 and 781 in 2014. The number of pigeons fanciers correspondingly declined from 36,217 in 2000 (not know for earlier years) to 20.358 in 2014. The number of rings annually issued steadily declined from 1,780,995 in 2000 to 1.030,930 in 2014. This steep decline in availability of racing pigeons has been shown to impact Goshawk numbers (with steep declines in many parts of The Netherlands, probably caused by a suite of negative conditions including declining food supply), but – so far – not Peregrine numbers. The latter’s population is still on the increase, presumably because Peregrines profit from an urban life style (including feral pigeons as a source of food), and because many nestboxes have been placed in coastal sites and near wetlands where Peregrines profit from concentrated bird migration in spring and a suite of ducks and waders. 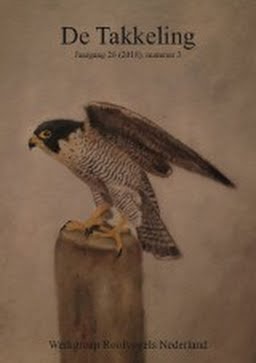