Since 1990, a study plot of 45 km2 of wood- and heathland in western Drenthe has been intensively surveyed. The first Short-toed Eagle in this region was recorded in 2008. Since then, in most years one or two individuals summered for up to more than two months (between 19 May and 7 September). One bird was frequently watched in 2019 on a clear-felling cum heath in the Forestry of Smilde in western Drenthe. This bird, occasionally accompanied by a second, was seen between 21 June and 28 August. It resided for long periods of time at a large clear-felling, where solitary Scots pines Pinus sylvestris and several dead larches Larix leptolepis served as sitting posts. Probable roosting sites, where the bird was flushed in early morning, were trees in the forest edge (sitting heights resp. 10 and 9 m for Scots pine and oak Quercus robur). Normally, hunting was commenced from 8/9 o’clock onwards, mostly in the morning when temperatures were rising and wind force increased. During the hottest part of the day, when temperatures at ground level had increased to >40°C (on 24 July 2019, for example, already by 9 h local summer time) and reaching 60°C in mid-afternoon, no hunting was observed, despite the fact that temperatures were still conducive to above-ground activities of snakes in the shade (where temperatures levelled off at 40°C). However, perhaps the snakes’s habit to withdraw into shaded parts of the clear-felling during the middle of the day may have reduced the hunting opportunities for Short-toed Eagles. The window for hunting during the hot summer of 2019 was effectively reduced to the morning and late afternoon, precisely the moments when Short-toed eagles were observed hunting. Seven pellets were collected, containing remnants (mostly scales) of 6x Grass Snake Natrix natrix and 1x Viper Vipera berus, the most abundant snake species in this region (Smooth Snakes Coronella austriaca are scarcer and Slow Worms Anguis fragilis are abundant but weighed only 10.1 g on average; n=140, range 1.5-31.5 g). Prey carrying Short-toed Eagles were recorded twice, one with a Grass Snake, another with a Slow Worm (which was eaten in the air). It is not known whether the recorded frequency of Grass Snake and Viper in the pellets reflects their abundance and availability in the terrain. In terms of profitable prey, though, Grass Snakes should be taken by preference (body masses ranging up to 219 g, n=13), much more than for Viper (up to 66 g, n=3). Agonistic encounters with other birds were rather frequent, usually other raptors pestering Short-toed Eagles in flight (7 times for 19 observations of Short-toed Eagles in 2018 and 2019). It was recorded four times for Honey Buzzards Pernis apivorus (once targeted at a sitting Short-toed Eagle, once three adult males with feint attacks, once an adult female heading straight for the eagle from a long distance, and once an adult male together with two Buzzards Buteo buteo), twice for Buzzards (two adults, and an adult breeding bird with chick on the nest performing serious attacks, the only time that an attack was more than just a feint), and once a juvenile Kestrel Falco tinnunculus. More than evasive manoeuvres on the part of the Short-toed Eagle were not recorded. Flight initiation distances were considerable, i.e. on average 183 m in western Drenthe (n=5, range 71-330 m) and – for comparison – on average 180 m in the Sahel (Senegal and Niger, n=3, range 90-305 m). This bodes ill for the prospects of eventual breeding, as Dutch nature reserves are presently being converted into recreation parks. The density of the network of paths in this particular region has steadily increased since 1990. For 222 random points in the study area of 45 km2 the distance to the nearest public path is measured five-yearly. The percentage of points at <50 m from the nearest path increased from 50% in 1995 to 72% in 2015. Of the 222 random points, 28 were at a distance of >300 m of the nearest path in 1995, dwindling to only 8 in 2015. Together with many initiatives to increase the number of visitors to the parks, this is bad news for species like Short-toed Eagles in need of large reserves without human disturbance. 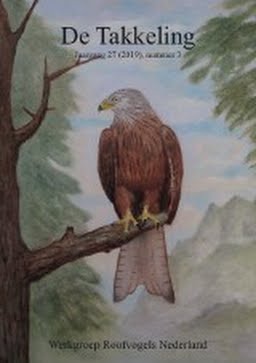