Guidelines for contributors to Atlantic Seabirds

We welcome papers on any aspect of seabird biology. The geographical focus of the journal is the Atlantic Ocean and adjacent seas, but contributions are also welcome from other parts of the world provided they are of general interest. Manuscripts should be in English, and three copies of the text complete with tables and figures should be provided when submitted. Manuscripts should be printed on white paper, on only one side of the page, with double spacing and broad margins. Figures should have solid black lines on pure white paper. Scientific names of genera and lower taxa should be in italics but may be underlined when typed. Vernacular names of species should start with capitals, e.g. Northern Fulmar. Do not capitalise group names, e.g. grebes, gulls, corvids. Units and abbreviations should conform to the S.I. system where possible. Use 0.01 and not .01. Use 50%, not 50 percent. Details of statistical analysis, which should always be included, are type of test, the value of the relevant test statistic, the sample size and/or degrees of freedom and the probability level. Commonplace statistical abbreviations such as ANOVA, SD, SE, df, t-test, x2, F, P, n, r, rs should be used. A post-fix to the test statistic symbol can be used to present the degrees of freedom, e.g. x23, F12,34. and where appropriate, include a reference for the statistic used. Variables, mathematical formulas, and the Latin abbreviation et al. should be in italics but may be underlined in the draft version. Do not otherwise use italics or underlining. The title should be short and concise, a proposal for a 'running head' is welcomed. Avoid too many subdivisions, do not use more than three different types of headings; do not number. Subdivisions should include: Abstract, Introduction, Methods, Results, Discussion, Acknowledgements, and References. The abstract should reflect both content and emphasis of the paper. The Introduction should be restricted to scope, purpose, and the rationale of the study. Limit the information on Material and Methods to what is essential to judge whether the findings are valid. Limit the Discussion to the main contributions of the study in relation to the findings of previous workers. Restrict speculation to what can be supported with reasonable evidence. Acknowledge only those who substantially contributed to the paper. Cited literature should be restricted to significant, published papers. Check your citations carefully against the reference list and vice versa. Examples of literature cited in the text: (O'Connor 1984), (Baudinette & Schmidt-Nielsen 1974) or, in case of more than two authors (Pettifor et al. 1988). References in the text should be in order of publication, e.g. (Brown 1974; Anthony el al. 1981). In the reference list the literature cited should be in alphabetical order. Titles should be given in the original language. Examples: Asbirk S. 1978. Tejsten Cepphus grylle som ynglefugl i Danmark. Dansk Orn. Foren. Tidsskr. 72: 161-178. Berger M. & J.S. Hart 1974. Physiology and energetics of flight. In: Farner D.S. & J.R. King (eds) Avian Biology, 4: 415-477. Academic Press, New York. Greenstreel S.P.R. & M.L. Tasker (eds) 1996. Aquatic predators and their prey. Fishing News Books. Oxford. Van Eerden M.R. & B. Voslamber 1995. Mass fishing by Cormorants Phalacrocorax carbo sinensis at lake IJsselmeer, The Netherlands: a recent and succesful adaptation to a turbid environment. Ardea 83: 199-212. 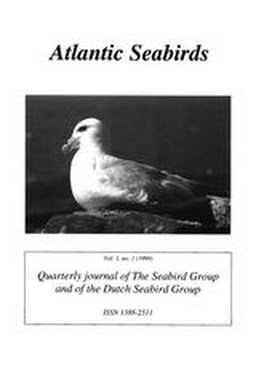